This guide to the best surf camps in Costa Rica showcases what we think are the hottest surf stays in the home of Pura Vida right now. It’s got options for all levels, for luxury seekers, budget travelers, and plenty more…

Surf camps in Costa Rica are a proper bucket-list experience. It’s sorta’ what everyone dreams of – think wake up calls courtesy of the howler monkeys, dawnie sessions as the ocean mists are burned off the Pacific, breakos of fresh papaya plucked from the jungle, and sunsets you’ll never, ever forget.

Backing all that up is the simple fact that Costa Rica now boasts a formidable variety of embarrassingly consistent breaks to suit all levels, from the barrels of the Caribbean beaches to the endless peaks of Santa Teresa and Quepos.

This guide showcases what we think are the very best surf camps in the country for the 2023 season. We’ve gone through all the major surf towns, from tried-and-tested Tamarindo to the reefs of Puerto Viejo de Talamanca on the Caribbean, with more off-beaten locations and upcoming surf towns in the mix to boot. Let’s begin… 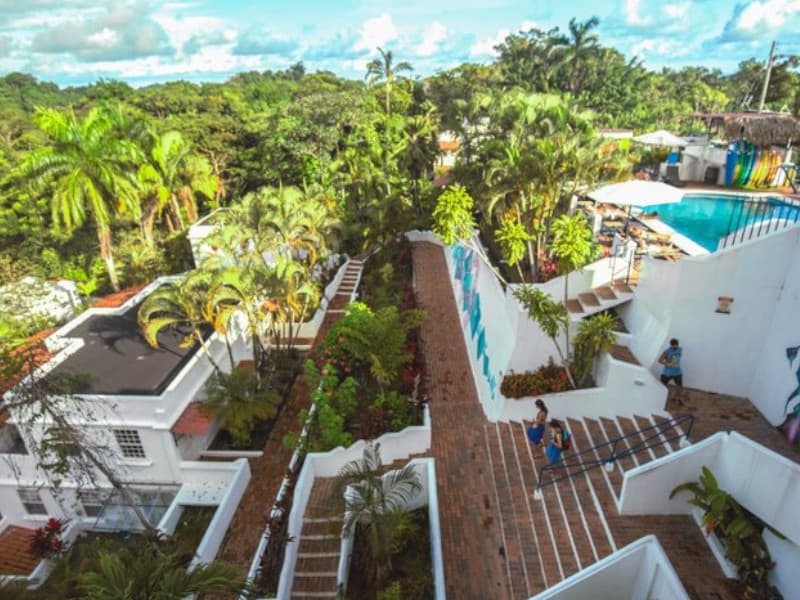 Selina is a name that most surf-camp veterans will know by now. The CoWork-surf brand has outlets all over these days, from Israel to Portugal, the USA to Colombia. Those who’ve been might also know that some Selinas are better than others. Thankfully, the one down on the cusp of the Manuel Antonio National Park in south-central Costa Rica is one of the finer choices.

It’s a gorgeous two-story villa with no fewer than three separate swimming pools, a sun-kissed deck space that doubles as a yoga shala, a forested garden area with quiet walking paths, and one of the best hotdesk spaces we’ve seen in any surf camp, anywhere – views of the monkey-swinging jungle canopy as you work, anyone?

They offer a well-balanced 7-day package for just over $800 per person that includes a bed in a shared dorm (you can also upgrade to a private or private plus room). It includes five separate surf lessons and three wellness sessions of yoga and meditation, plus breakfasts, lunches, and some dinners throughout.

School of the World Surf Camp 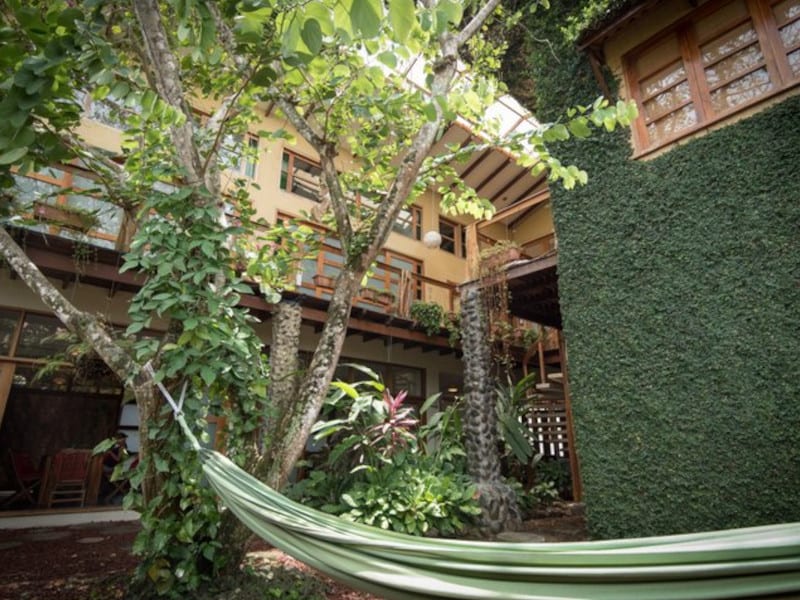 A sign outside the School of the World in Playa Jaco reads “Surfing. Spanish. Yoga. Photography.” But don’t go thinking that this one falls into the trap of being a jack of all trades master of none. The surf tuition is very highly rated indeed, so much so that it reigns among the best surf camps currently operating in Jaco and the non-peninsula coastline of Puntarenas (AKA – the parts of the country that are within pretty easy reach of San Jose).

You’ll have to prepare for a pretty packed schedule on the 7-day package at School of the World Surf Camp. They do two sessions in the water EVERY SINGLE DAY, each of which lasts the full two hours and has qualified surf leaders with you at all times. That’s backed up by expert video analysis and technical training out of the water. It’s very much the intensive surf course that beginners eager to improve fast should look for.

We really like the vibe of the actual guesthouse where you’ll be staying. It’s neatly tucked up in the hills just behind the hubbub of Jaco Beach (which anyone will tell you isn’t the prettiest town in Costa Rica). It has dedicated yoga rooms, plant-filled courtyards, and a convenient communal space with fast internet when you need to get some work done. 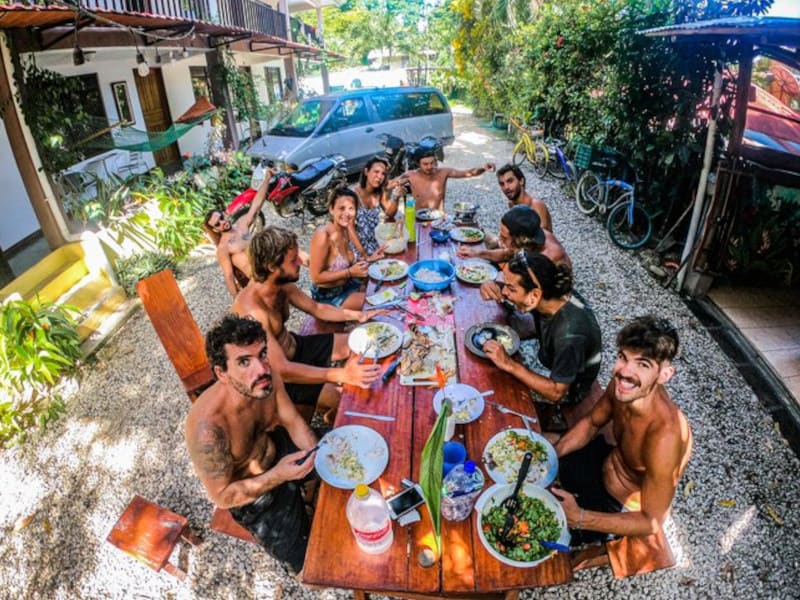 There’s a new breed of uber-cool surf camps taking over down in Santa Teresa, but we still like the OG of La Posada Hostel. It remains a bit more down to earth than many of the stays in the region, not to mention a whole load easier on the wallet than those fancy eco resorts and whatnot. Options include private doubles and shared dorms.

All guests get healthy breakfast plates of tropical fruits and cereal, Costa Rican coffee and juice, along with evenings of chilling and socializing at the on-site bar (complete with pool table and ping pong for good measure). Don’t underestimate the vibes of this surf camp. It’s known for its happening scene and loyal group of local followers. It’s a fantastic place to go if you’re keen to make new surf buddies or are traveling alone (they call it the “La Posada family”!)

Anyway, to the surfing. La Posada’s 7-day surf package involves five separate surf classes spread throughout the week, along with access to all surf equipment for private practice whenever you like, morning until night. Overall, we’d say the tuition here is aimed more towards improvers than expert surfers, but then so are the multi-peal playas of Santa Teresa most months of the year. 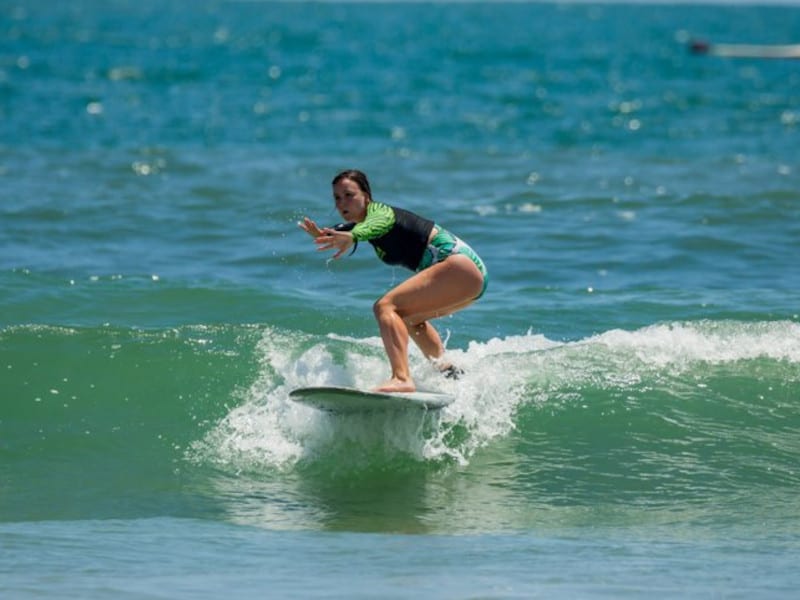 Iguana Surf Tamarindo is one of the longest-running surf shop and rental outlets in the town, which itself is the longest-running surf mecca in the whole of Costa Rica, with breaks that barrel but also mellow beach cruisers for the learners. The lodge is situated on the northern fringes of the town, within easy walking distance of the bumping reggae bars but also a hop, skip, and a jump from the waves.

We’d say that Iguana offer some of the best all-round surf packages for multi-level and family groups. A 7-day jaunt here includes four lessons, all of which are taken by ISA-qualified instructors (not always the case in these parts!). You also get access to the in-house rental gear to surf, surf, and surf some more whenever you’re not taking a lesson.

There are private suite rentals and shared dorms to choose from.

The Surf Synergy Surf Camp is another choice on the hills just outside of Jaco. It’s fantastic if you’re super eager to get on the waves fast after jetting into San Jose – the town is just two hours’ drive in a bus from the airport. We also like it for the balance between wellness and surf – daily yoga, healthy breakfasts, cycling trips, and SUP tours are all part of the mix here.

The pad itself benefits from being amid the jungles to the north of Playa Jaco, which is where you’re likely to be surfing each day. We say benefits because that part of town is MUCH quieter than the buzzy center. There’s even room for a swimming pool with individual lanes, a yoga shala, and some lovely tropical gardens with views of the surrounding rainforests. 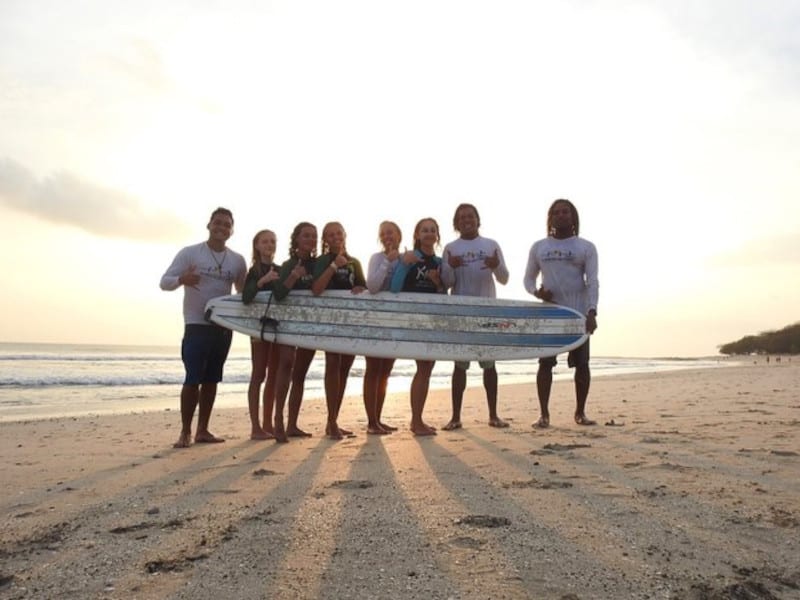 The Pura Vida Surfers Surf Camp promise a yoga-surf combo package that’s full of “soul”. We’d usually baulk at such fluffy stuff, but we kinda’ get what they mean. This is no mass-produced, big-brand surf camp. It’s locally owned, never OTT, and happily ditches any of the naff branding for something a whole load more wholesome. It’s Costa Rica through and through.

They’re pretty proud of their all-new pad, which is less than 150 meters from the main beach in Santa Teresa. It’s got lovely doubles and twins done out with natural woods and proper Tico design twists, all nestled in a dash of coastal jungles where the howler monkeys are the wake-up call. There’s also an on-site swimming pool for good measure.

There are two things that make the offering from Pura Vida unique. First, the broad spectrum nature of the surf lessons. You don’t just learn the basics here, but everything from surf etiquette (we wish more people taught that, eh!) to down-the-line skills. Secondly, the price. Okay, so it’s still a touch over $2k per person, but that’s decent for this corner of Central America and it’s for a complete 10-day package. 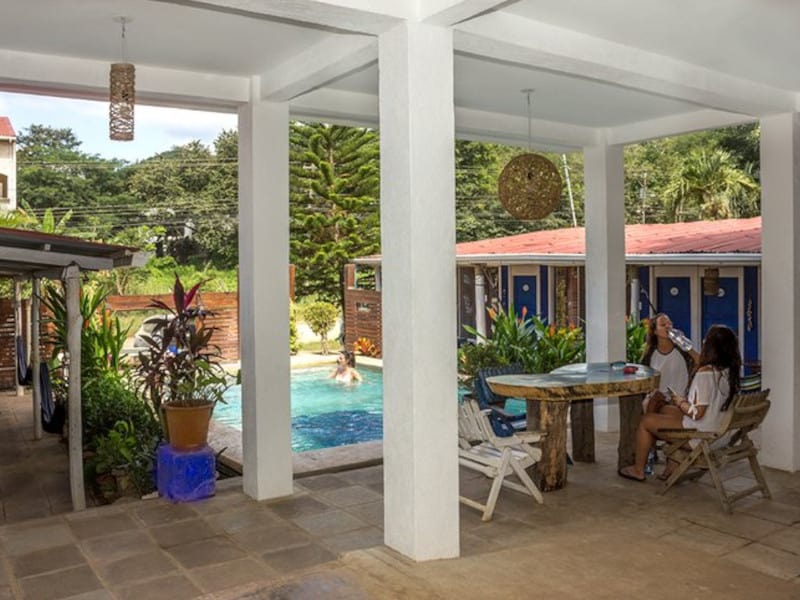 There was a time when Tamarindo was the undisputed kingpin of surf camps in Costa Rica. That’s since changed as the regular beach breaks of Santa Teresa come into the fore. However, we’d be amiss not to mention arguably the original backpacker-surfer hub of old Tam: La Botella de Leche.

This one’s been running surf camps for nigh on 15 years in total. They’ve helped countless newbies learn the art of pop ups and green wave surfing on the breaks of Playa Tamarindo, Avellanas, Langosta, and others. And they’re still going today, with affordable 8-day packages that combine six days of surf lessons with in-house instructor Marcos Ferrari and free use of surfboards from check-in to check-out.

Granted, this isn’t the luxury retreat that you’ll see on the fronts of travel brochures. It’s a true budget stay and the prices match that – you’re looking at $600 or so for a complete week, which is a BARGAIN for Costa Rica! That said, the camp does have great proximity to the legendary Tamarindo nightlife and its own swimming pool. Oh yea, and packages include an excursion out to see the local crocodiles! 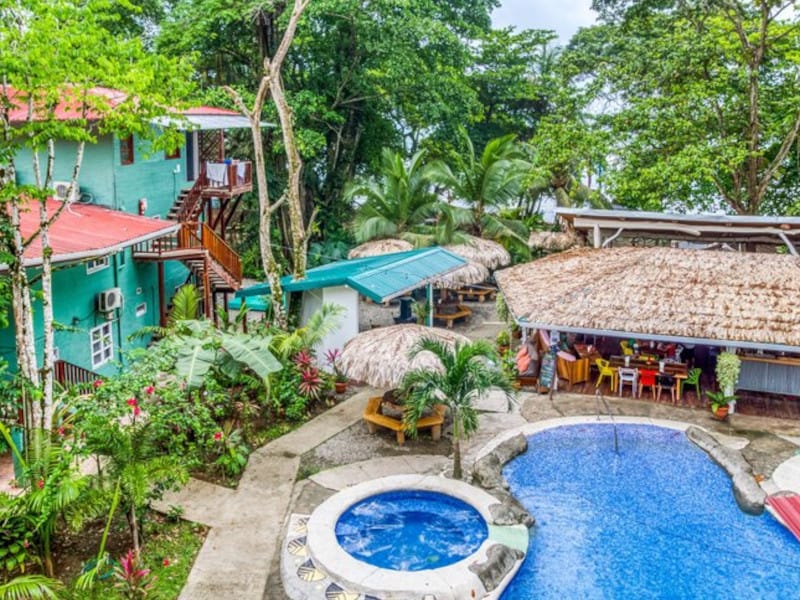 The sole option on this list of the finest surf camps in Costa Rica for 2023 to beckon surfers over to the Caribbean side of the country comes in the form of the acclaimed Selina Hostel Puerto Viejo. It’s cracking pad, with a  lovely pool in the garden, jungles swirling all around, and a series of proper Carib-style dorms and doubles with both shared and private bathroom options.

The main deciding factor when it comes to picking this surf camp over the others listed here will surely by the season. The Caribbean side of CR works best for a short burst of summer months between June and August, when low-pressure storm send regular swell up from South America. We’d say the waves then are much more suited to experienced surfers on the hunt for proper barrels and tubes.

You can opt for the 8-day package at Selina to get five lessons, surfboard rental totally covered, and a week’s access to the in-house co-work space.