The Ultimate Guide to Surfing in Manuel Antonio

Surfing in Manuel Antonio might take a backseat to the sloth-spotting that happens in the namesake national park, but you will find a fantastic beginner beach break here, plus a whole stretch of beaches running north from the reserve that work pretty darn well. There’s a growing bunch of surf camps on offer too. And you get to hike the famous trails when you aren’t on the waves.

An introduction to Surfing in Manuel Antonio

The name Manuel Antonio is usually enough to conjure images of swinging sloths in forests of cottonwood trees, splashing humpback whales, and howler monkeys gazing over orchid-filled woods. Welcome to one of the most biodiverse corners of Costa Rica, where the Manuel Antonio National Park spreads between idyllic beaches and animal-rich reserves. It’s hardly a surprise that most people come for the hiking.

Because of all that, surfing in Manuel Antonio hasn’t really taken off like it has up in Nosara, Santa Teresa, and Tamarindo. But the boom in visitors here has brought demand and what people found when they looked to the local shoreline was actually pretty pleasing – think a run of very consistent beach breaks, a smattering of barrel-giving rivermouths in the wet season, and hardly a line up to be seen.

Where we think Manuel Antonio really excels in its offering to beginners. You can come here to spot sloths and see the famous biodiversity of this nation and do some surfing on the side, easy. The breaks – at least the more southerly ones – are also protected from the huge SW swell systems by a speckling of islets, which turns the whole thing into a learner’s mecca.

Manuel Antonio at a glance

What’s in this guide to surfing in Manuel Antonio?

Where is Manuel Antonio?

We’ve seen guides that say that Manuel Antonio is a city on the Pacific coast. They’re half right. This most certainly is no city but it is on the Pacific. In actual fact, Manuel Antonio is the name for the national park that spreads over nearly 2,000 hectares of forest in Puntarenas province, some 2-3 hours’ drive from San Jose. Most people who come actually stay either in the town of Quepos or along the road leading from Quepos to the national park entrance. That’s good for surfing.

TL;DR – you’re aiming for the town of Quepos. It’s 2.5 hours’ drive or 3 hours’ bus from San Jose. There’s also an airport there but you’ll pay nearly $100 for a single 20-minute flight over from SJO. Hello moneybags.

We’ll get into where to surf in Manuel Antonio in just a moment. But first: Some geography. We’ve already mentioned how Manuel Antonio is actually the name of the legendary national park here. You cannot surf there. It’s not allowed. The beaches are protected and you won’t even be allowed to bring a surfboard in through the gates, which are patrolled morning until night during park opening hours.

That’s not a huge problem, though. The truth is that the main beaches in the park itself are too protected from decent S and SW swells to give any good action – a big headland pokes out on their western side. The only one that does have surf also runs north into the town itself, which is the end of the beach with the best waves. The upshot? It just so happens that park boundaries don’t inhibit the surfers here. You’re looking mainly for the spots to the north…

Palo Seco is pretty unchartered surf territory. It’s roughly 10 miles due north of Manuel Antonio itself, facing south into the dominant SW wet-season swell channels. Thankfully, a slightly elongated continental shelf helps to trim down the power a touch and you get a whole run of regular head-to-chest high waves for much of the main surf season. There are some spot where rock reefs add boils. Be sure to dodge them. Also know that this region is rip central and very unknown, so we think some experience surfing those sorts of breaks will help. AKA – be wary.

The place to escape the crowds is the 3-mile-long Isla Damas that skirts the Puntarenas coast as it trundles away to the northwest of Quepos town center. Getting here can be hard because the beach is technically on an island (hence the name) formed by the courses of the Rio Cotos. Most people do it by boat taxi but we’ve seen brave souls tramping across the estuary (not recommended becuase of crocs!).

The pay off for coming is one of the most consistent surf breaks in the region. Perfectly positioned to receive those big SW pulses in the wet season, it hardly stops here from May to August. Days range from big, beefy 12-footer barrels to 4-foot ankle burners, which will draw the learner crews and smattering of local surf schools (although there’s no overload a la Tamarindo).

The dredging and the sandbanks that come from the deposits of the Quepos River definitely help this break by cutting a nice deep channel against the harbor wall. But it’s the breakwater that really adds the shape. Big SW or any W swells can plump up neatly on the boulders at the end of the concrete and give a sucky left-hander that hollows and romps away nice and quick. It’s one of the more fickle waves in Manuel Antonio but great when it’s on.

We’ve virtually never seen truly rideable waves up on Biesanz Beach, but then we don’t go there all that much. Hidden away on the north side of the headland, this one’s the most protected of all the breaks. Probably works good for family surfers with little ones looking for a light boogy sesh. Also could work in the dry-season when N swells are more in action. It won’t be high-quality stuff, though.

Right in front of the fantastic Arenas Del Mar Beachfront & Rainforest Resort, little Playitas Beach ups the ante a touch to give extra punch on account of its south-facing sandbars. Wet-season W swells float in here unmolested, which SW swells are tempered a bit by outlying Isla Luana. The result is consistently good right that comes off the rocks from mid tide and up. Can get too fat and dumpy at full high and it’s too shallow to work at low.

Playa Manuel Antonio is just another name for Espadilla beach, which is the long run of fantastic sand that connects Quepos town with the entrance to the main national park. It’s not inside the park, though, which means surfing is still a go. A group of outlying islands really chops down the angriest swells in wet season. They’ll temper the whole thing into a true beginner haven, meaning light, mellow cruisers that rarely go above head high. This is the main reason that we say surfing in Manuel Antonio beats Tamarindo if you’re a total learner.

El Rey is the last surf break that takes over on the south side of the Manuel Antonio National Park. It’s long and curving, like a classic Costa Rican beach break. We’ve been a few times and the thing that really blows us away is just how deserted it is. You’ll ALWAYS find a peak to yourself here. Come for the push and make sure it’s a smaller swell. Anything pushing 9 foot here will try to close out and it’s hardly worth the trip down from Quepos.

Where to stay when surfing in Manuel Antonio?

We’ve already name-dropped the Arenas Del Mar Beachfront & Rainforest Resort for its closeness to the Playitas right hander. That’s great to have – a stroll to one of the best waves in town. We also very much like the small splash pool and the suites with Pacific views.

This is proper rustic stuff – think a wood-built shack between the mangroves of the Isla Damas. There are endless and empty beach break waves for all levels right out front. Reminds us of what surfing in CR used to be like.

The Jungle Beach Hotel Manuel Antonio is more of a classic Costan Rican eco lodge. It’s nestled in the jungles about 5 minutes’ walk back from Manuel Antonio Beach, within easy reach of the national park to boot. 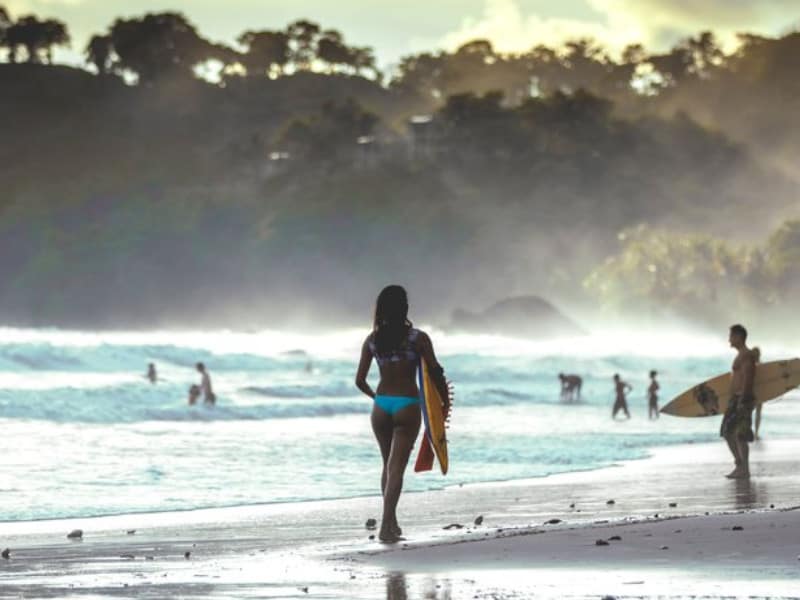 Remember we mentioned that there’s an upcoming mix of surf camps currently going on in Manuel Antonio. Well…here they are. These are the fully-fledged surf packages. They typically include lessons and gear rental plus accommodation and food – basically everything you need to get right on the waves. Right now, they are all run by Selina Manuel Antonio. They’re a very well-known chain of surf camps that tend to get things dead on right for beginners. Check out…

Step one: Book flights to the Surfing in Manuel Antonio…We use Skyscanner and only Skyscanner for this. The reason? We’ve always found it the best site for comparing deals from basically ALL airlines and somehow seems to offer deals that beat going direct.

Step two: Book your surf lodge. There’s Booking.com. That has consistently unbeatable rates for hotels and a nifty map feature that lets you check how close EXACTLY that hotel is to particular breaks. Or Book Surf Camps, which is the numero uno online booking platform for fully-fledged surf-stay packages.

Step three: Book surf lessons and other activities For advance booking, you can use GetYourGuide or Viator. To be fair, though, we usually just leave this until we’re there – it’s easy to book in person in most surf destinations.

When to surf in Manuel Antonio?

There’s surf all year in Manuel Antonio. But, as with the rest of Costa Rica, things tend to get a whole lot bigger during the wet season. That starts in late-April and runs until November time. It’s when the strongest and most regular SW and W swells come. Sadly, it also happens to be – as the name implies – the wettest time. On the flip side, since Manuel Antonio is a great option for beginner surfers then the dry season should still be fine for surf trips. It will be smaller but there’s lots to learn on, plus decent N and W swells between November and March can still bring some goods for intermediates and up.