There are countless surf camps in Morocco to pick from. This guide can help you choose the ones that are riding high for 2023.

Morocco is probably the best place to do a surf camp in Africa. They’re some big words, we know, especially with upcoming destinations and empty waves all along West Africa in particular. But there are just some things that the home of tagine and the soaring Atlas Mountains going for it, not least the fact that the best surf camps in Morocco are without doubt among the crème-de-la-crème of surf camps on the continent.

You’ve also got the multi-level array of breaks that strings the Atlantic coast north of Agadir. There’s enough there to cater to a kaleidoscope of levels, from the frothing right shoulders of Anchor Point to the lazy cruisers that curl into the sands of Tamraght. Then there’s the accessibility – Morocco, unlike much of Africa, can be reached on short-haul budget flights from Europe. Plus, the surf season here coincides nicely for the winter, meaning there’s warm-water and sunshine to be had while your mates at home are shivering and complaining about the cost of living. Woop.

Of course, not all surf camps in Morocco are made equal. The last 10 years have seen a major explosion in the number of options. That means there’s chaff and there’s grain. We focus on the latter in this guide to the very best of the bunch… 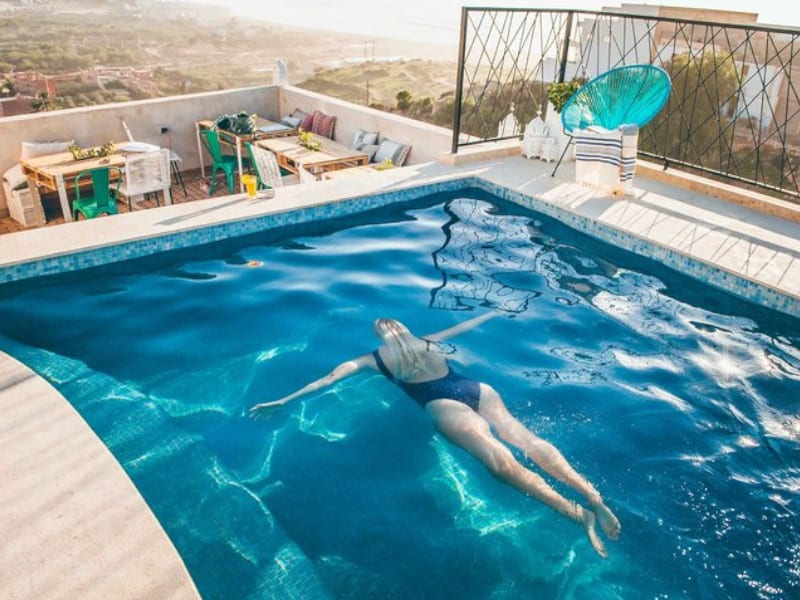 We’ve seen honorable mentions for The Yogi Surfer in more travel mags this year than we can remember. The plaudits are totally deserved. The pad is just incredible. It’s perched on the dusty ridges overlooking Plage Aourir to the south and the long Plage Imourane to the north, both of which have surf within walking distance if you want it.

With a whiff of the luxuriant Moroccan riad about it, The Yogi Surfer offers dorm and double options that are clad in patterned tiles and replete with wicker furnishings. But it’s the exterior that steals the show, specifically up on the roof. Head there to find a sun-kissed patio with a pool gazing out over the Atlantic. Downstairs is a calm room with a round sharing table suited to co-working.

You can book individually at The Yogi Surfer, but we’d say the packages are better bang for your buck. They included daily surfing and both Pranayama and Yin yoga run by super-qualified in-house instructors. There’s uber-nutritious food included, cooked by in-house Moroccan chefs each night. The whole thing is veggie-friendly to boot.

A note on why we partner with BookSurfCamps.com: Book Surf Camps are probably the biggest online aggregator of surf camps and surf-yoga packages in the world. We sounded out a quite a few potential partners before we affiliated with them. But, in the end, the abundance of choice for beginners, intermediates, and female-only surfing sealed it. We also love the simplicity of their booking system and the trusted brand name, along with the focus on connecting with homegrown local businesses on the ground. 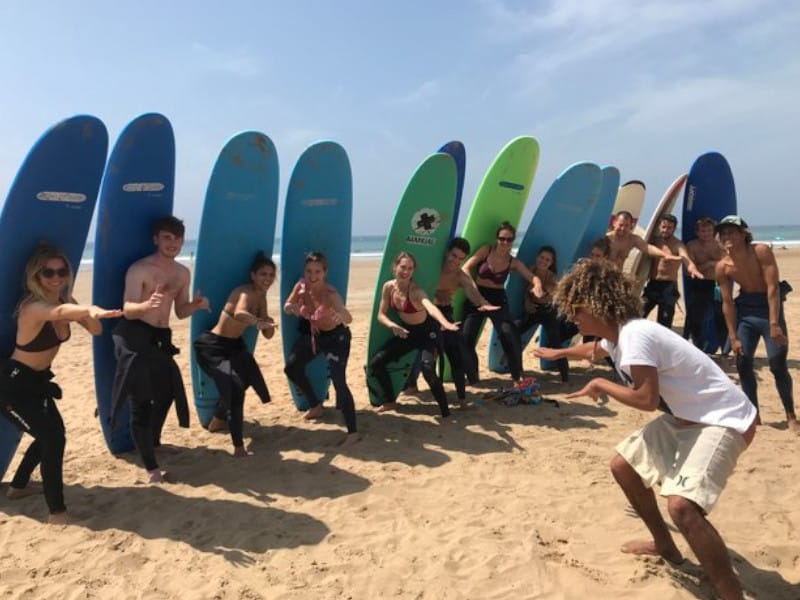 Amayour Surf Hostel might not have the Scandi-cool design features of some nifty camps these days, but it gets one very, very important thing right: It’s FUN. Like, super, duper fun. The instructors and regular crowd here are very chilled and very easy going. They offer some of the most accessible tuition we’ve come across in the region, in a way that’s easy to understand and – did we mention this already? – fun.

The setting? Classic Taghazout, the single most famous surf destination in Morocco. Amayour Surf sits on the south side of the main town, literally steps from the peeling rights that cruise into the bay from December to March. Packages include wake-up yoga, free surf rentals, and a daily surf lessons on every day apart from departure and arrival days. Naturally, food and accommodation are also in the mix. 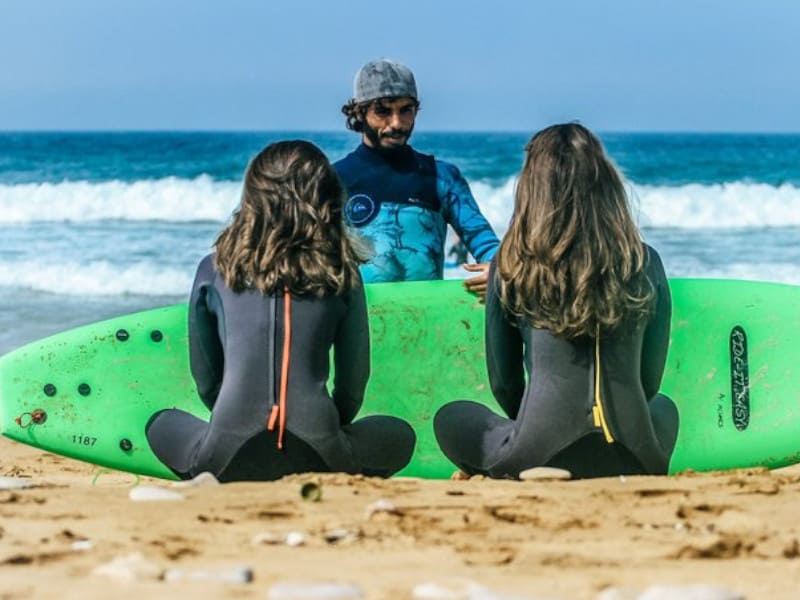 We’ve got plenty of great things to say about the Wave Gypsy Surf & Yoga. Plonked into the middle of the weaving, winding alleys that make up the backstreets of Tamraght, this is a surf camp with proper character. It’s done out like a classic Berber coast cottage, with tiled patios and lazy seats, and cozy rooms covered in traditional artwork. Basically, it’s a super nice place to bed down between surf sessions.

Like most of the very best surf camps in Morocco, the focus here is on fun sessions that help you improve whilst also enjoying all that the country has to offer. Through a week-long package, you’ll do five surf lessons with either Taoufiq (maestro longboarder) or Franky (ISA-certified) and five yoga classes (in the evenings). They really make the most of the mellower spots on the south side of Taghazout to focus in on what total beginners to improvers want out of a camp.

You can also base yourself here for all manner of add-on tours. Choose the day in Paradise Valley to be whisked into the Mini Atlas mountains for wild swims in natural oases. Or choose the souk outing to get down and exploring the frenetic bazaars of old-town Agadir. 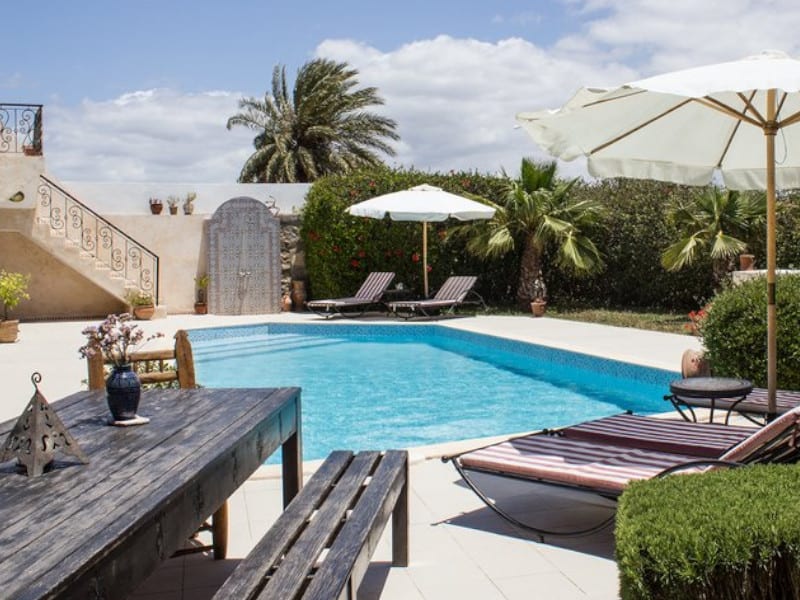 No list of the best surf camps in Morocco could possibly skip out on La Vida Surf. It’s not quite like the other places on offer here, since its hosted in Villa Dar Shajara. Instead of jostling for space right by the beach, that’s immersed in the rolling deserts of Ait Bihi, between the scrawly argon trees and dunes. The downside to that is that you won’t be able to walk to the breaks. But it hardly matters if you ask us, because the upside is a proper Moroccan country retreat surrounded by nature.

The hotel itself is cozy and charming. There’s a walled-off pool with Moroccan tiles that glint under the sun, and a couple of pomegranate trees for shade. On top, a yoga shala awaits for those evening sessions in the gaze of the Atlas Mountains.

Packages with La Vida are very well rounded. They are mainly about the surf – there are daily sessions that include no more than four people per instructor. But there are also cultural activities for good measure, like a guided morning hike and outings to the Atlas. We also love that all the food here is plant based. It’s very much the camp of choice for the eco-conscious, vegan/veggie, health buff. 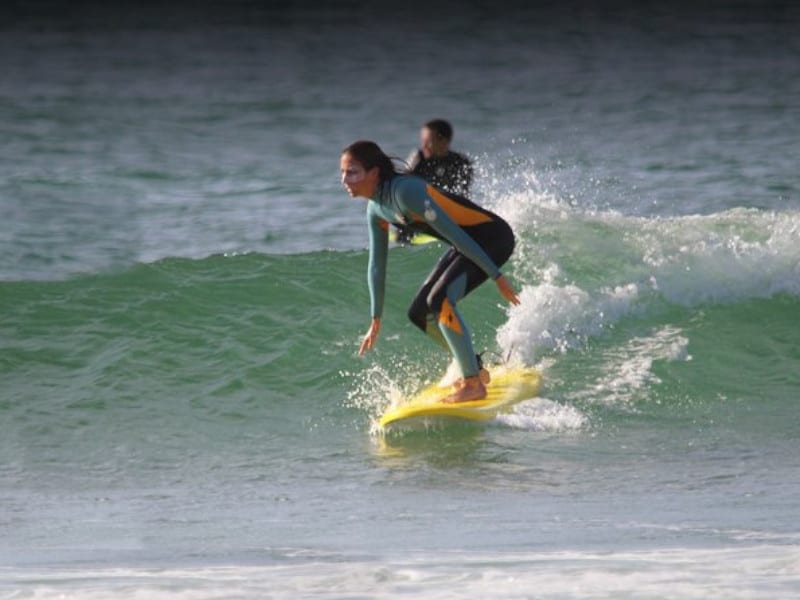 The folks over at Moroccan Surf Journey have created one of the few female-only surf camps in the country. It’s – just like most all of the options listed here – is set in the town of Tamraght close to the major surf town of Taghazout. The lodge itself is basic but super clean, with a series of double and twin rooms that converge on a Moroccan-styled lounge and kitchen communal space.

Naturally, the main draw is that it’s lady’s only. But we should also add that groups are kept to a strict maximum of five per week. That’s great for getting the attention you need on the daily surf lessons (all six of them), and customers report fantastic improvements in technique and surf strength on this program.

The intimate nature of the package ensures that it’s a pretty sociable affair. Weekly BBQs, a dedicated surf movie night, a bonfire, and rooftop cooking sessions help with that. It’s also possible to do outings to the Atlas Mountains if the surf is flat.

One of the best short surf packages in Morocco comes courtesy of the folks over in Holy Surf Maroc. This is also a top option if you wanted to steer clear of the busiest section of breaks on the Agadir shores up to Taghazout. The reason? This lodge is closer to the wind city of Essaouira, which means the chances are that your playground will be the all-level stretch of sand at Sidi Kaouki (which usually means smaller crowds).

The three-day package might be short but it’s got a strong focus on performance. All lessons are taken by Federal Brevet F1-ceritifed instructors and the equipment is some of the better-quality stuff we’ve seen in Moroccan waters. You’ll be staying in a traditional Moroccan coastal lodge with its own pool and gardens. Trips also include daily yoga sessions and all meals – think homemade tagines and mezze plates. 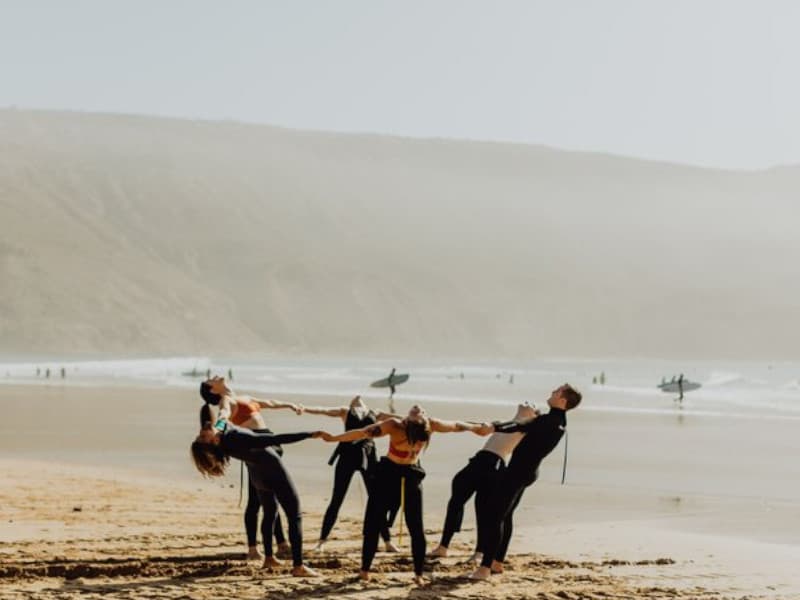 The Surf Hotel Morocco is more a traditional holiday stay than the more rustic retreats over in Taghazout and Tamraght. As its name implies, it’s built like a proper hotel, with twin and double rooms spread over a series of floors and meeting at a communal lobby space. Don’t worry – there’s still the quintessential rooftop terrace on offer, complete with sea views.

What we like about their 8-day package is that it’s honed for people who already know how to surf. That means session will be more technical and the spots you surf are likely to be a bit more diverse and challenging than just the few that spread up and down the beginner beaches north of Agadir.

In-house yoga instructors ensure that you’ve got a steady supply of chakra alignment included, six separate sessions, in fact. All food is included, from breakfast to dinner, along with a packed lunch at the surf spots.

When’s the best time to do a surf camp in Morocco?

The winter is the best time to do a surf camp in Morocco. There are waves all year round here, but the wind is stronger in the summer months. It will usually die down by November time, starting a season that lasts until around March. Total beginner surfers will still have a great time in the summer, but it will be hotter at that time of the year.

Where is the best place to do a surf camp in Morocco?

The town of Taghazout is the capital of surf camps in Morocco. It’s got loads of really great options and access to all sorts of surf breaks, with waves for complete beginners to the south and breaks for more advanced surfers near Anchor Point to the west.