Check this guide to the best summer wetsuits for 2022. We’ve got the shorties, steamers and eco suits that we think are the bee’s knees this season.

As May turns to June in the Northern Hemisphere and the H2O begins to crank up the heat, surfers everywhere are preparing to cut the thickness of those suits. The same goes down south when the winters take over up Nazare and Cornwall way. It’s a joyous part of the year, adding more flex to your paddles and more freedom to the surf experience. We love it. It’s hard not to.

But what are the best summer wetsuits for this year? Which wetsuit brands are making waves in the market? Who’s got the hottest new eco neoprene or the most light-weight Yulex rubber cuffs?

We’re here to help with all that. This guide runs through a couple of what we think are the creme-de-la-creme of the current summer steamer offering. There’s something for a whole host of riders, recommended by our in-house team who are, in all honesty, just happy not to be shivering any longer!

A quick-jump guide to the best summer wetsuits for 2021

The best summer wetsuits for men

There’s a constant debate going on at The Surf Atlas as to who wins out when it comes to the top overall wetsuit brand. Two big names are always up there – Xcel (more on them later!) and Vissla. Let’s put it this way: This OC-based outfitter out of Aliso Viejo has a very loyal following and we can see why. They basically make fantastic suits, all of the time.

More than that, when it comes to neoprene for the warmer months of the year, we think they’re a trick ahead of the pack. Vissla’s Japanese limestone-based material is air-bubble light and feels, at least to us, just a little more flexy than other stuff at the same price point.

That might be down to the manufacturing principle – Vissla try to offer “everything you need in a wetsuit and nothing you don’t”. Or, it could be the Super Stretch infusion in the outers and the Brain Fuzz thermal lining, which is thinner but just as toasty as most of its competitors.

More generally speaking, the 7 Seas has established itself as one of the go-to midrange options on the market today. At just a touch over $200 apiece, you can spend a whole load more on gear if you’d like. But we’d ask why bother? You’re getting all the bells and whistles in a steamer that looks pretty slick and fantastic here. Oh, and did we mention that it takes like 20-30 minutes in the sun to dry.

XCEL 3​/2 Infiniti X2 LTD Wetsuit – The best if you have the moolah! 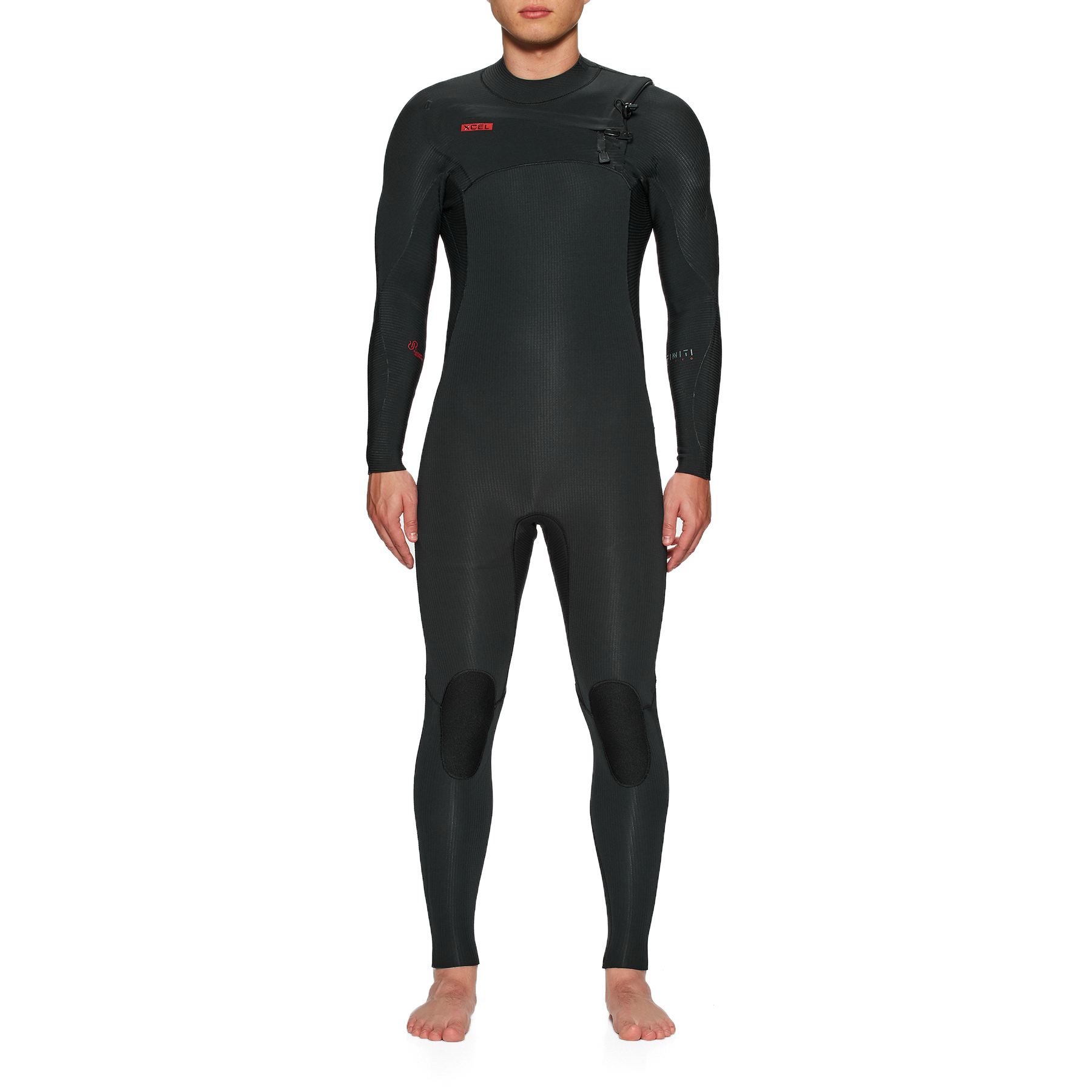 Best for? Serious surfers after top-of-the-range sruff! This could easily have been our top pick.

When we dragged on the Xcel Infiniti winter suit this past cold season, we felt like yelling, “ah – they’ve done it again”. We later found out that the long-running range had garnered the prestigious Wetsuit of the Year accolade at the Surf Industry Manufacturers Awards (SIMA). At least we know we’re not alone in falling in love with this particular neoprene…

The Infiniti is a sort of sit-between that runs alongside the Comp and the Comp X suits that form the higher end of the range from Xcel. However, it’s a bit more of an all-rounder than those performance models in our opinion. One industry Mag even described it as the “Golf GTI” of suits. The reason? There’s lots of focus on what the everyman surfer wants. AKA: Strong thermal features meets loads of flex.

You’re sure to feel comfy thanks to the Channel Flex addition. It’s a crosshatch woven fabric that brings lots of fibres at different angles against each other. The result? A very bendy wetsuit surface that will fold that way for your next duck dive; this way for that drop-in. Radiant Rebound – a metal-like interior lining – is another thing that works almost without you noticing, but it does add considerable warmth on the key panels.

Basically this is the sort of solid buy that will last you several summer seasons and check all the boxes. You really can’t go wrong. 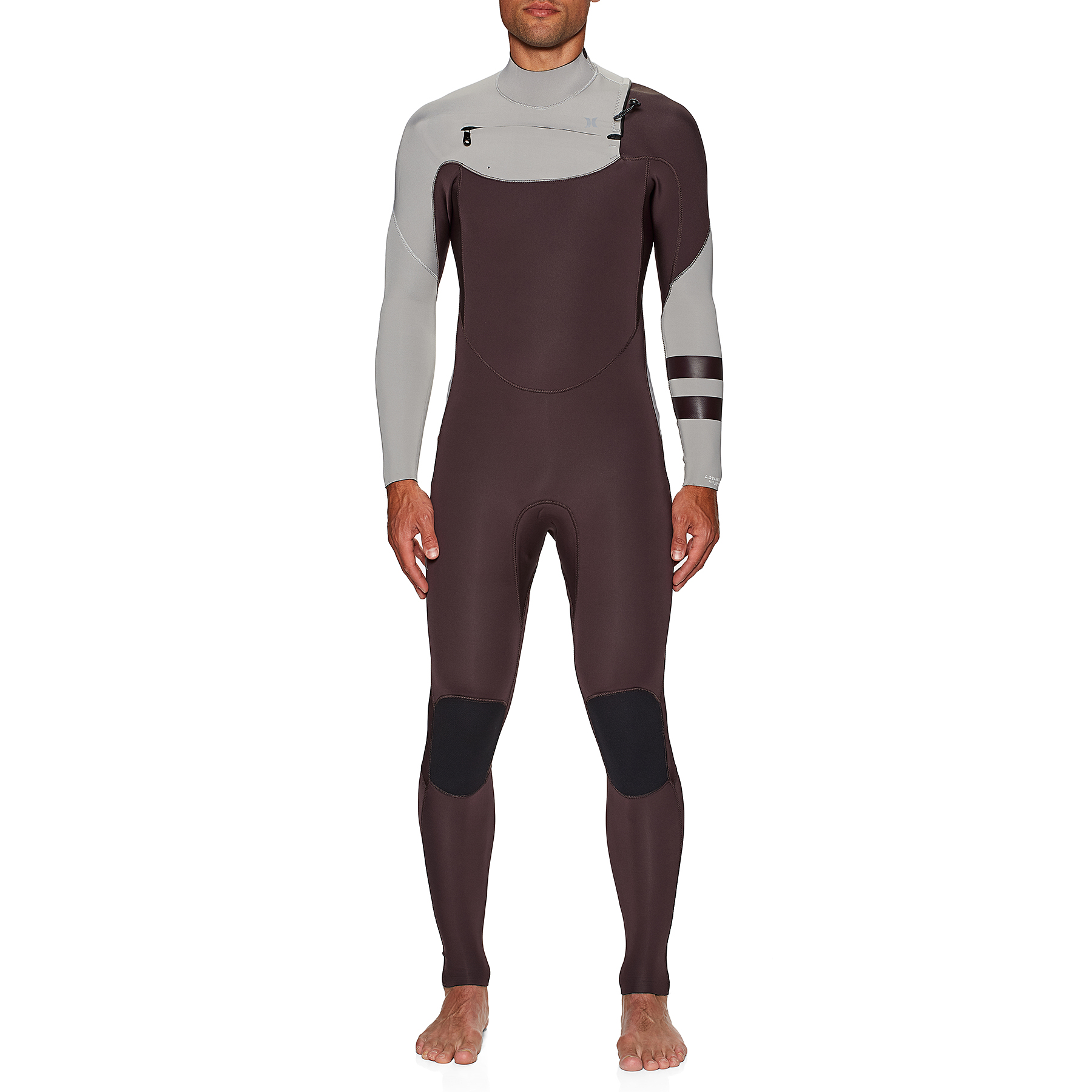 Best for? Everyday surfers who want something that drys quick and looks great.

Once upon a time, Hurley was the make that surfers loved to hate. It sort of straddled that strange line between hip urban wear and proper water gear. It just seemed like they were too concerned with getting the alignment of those ubiquotous suit stripes right to consider dropping in any serios thermo tech or whatnot. Not any more. Seriously, we’re about to recommend you go out and by a Hurley summer suit, and we can’t quite believe it.

Truth be told, things have come a very long way for these guys. New 100% neoprene construction with a trademark Exoflex material has really upped the bendiness of the rubber. They’ve dropped in some super-well-concealed kneepads that give good protection but hardly bring a bump to the leg panels. Oh, and we also love the chest-panel key storage, an innovation we can’t quite understand hasn’t been adopted across the board by now.

Where the Hurley excelled for us was in fast drying. Now that’s not such an issue in the summer months when you might have more sun to toast the wetties after a sesh (or, more importantly, before the next sesh). But it still makes a difference in places like Wales and Scotland when rays aren’t 100%, and means you’re less likely to be pulling on that damp mush when the swell gets kicking.

Buy Hurley Advantage Plus on Surfdome

Best for? Your first ever summer wetsuit

When Billabong thought up the Absolute range the aim was to create a premium suit without the premium prices. On the whole, we’d say they’ve done a cracking job of that. Yes, we often pull one on in rental outlets in Europe (they seem to be all the rage in Portugal) and think, jeez this is stiff. But 10-20 minutes into the surf that neoprene really loosens up and there’s very little sacrifice with thermal insulation to boot.

We’re not going to start spinning off the tech like you’re buying a £300 flagship here. You aren’t. This is a simple, less-is-more option for surfers on the hunt for something solid that will not break the bank. That’s what you get: Superflex fabric that’s good for medium-length surfing, a Silicone stretch lining to give versatility to the fit, and even a nod at new environmental concerns with partially recycled fabrics. Not bad at all for just a whisker over 100 quid!

Price wise, we think you’d be very hard pushed to find any wetsuit on the market that can even come close to the Xcel Axis in 3/2. Yes, there might be some marketplace second hander that’s less. But don’t lose sight of the fact that the limestone neo that’s used in these starter models is the very same stuff that’s used in the £300+ suits that sit at the very top of the Xcel range. It’s a no brainer if you’re after something simple but are low on dosh.

We sure you’ve heard us gush over the quality of the Xcel rubber before so we won’t bore you with that love-in again. Suffice to say that it hits that perfect balance between flex and thermal properties and allows for a fantastic range of movement. On top of that, you’ll get flatlock seam construction to keep the suit nice and trim, along with good transitions from the 3mm and 2mm panels.

Downsides here are that the suit rarely seems to be in stock (high demand, eh?) and that it can take a little longer to dry than other Xcel models. Also, don’t go thinking this is a forever suit. It’s not. A few seasons at most. Did we mention it was under £100?

The best summer wetsuits for women

Best for? Solid all-round suit with an eye on performance surfers

Rip Curl are seriously consistent performers in the world of wetsuits. The only reason they’ve not been mentioned yet is because we’ve got something of an in-house obsession with the current tech coming from Xcel and Vissla. But then we asked women riders what they had their eye on this summer and there was one standout mention: the 3/2 Dawn Patrol. It’s a name that seasoned surfers will have heard before and with good reason…

Yep, this is a very solid all-round suit that’s packed with RC’s excellent E3 and E4 neoprene – a combo that gives almost unparalleled warmth and flex balance at this price point. If we had to say, we’d reckon this was aimed at aggressive intermediate surfers who do medium to long summer sessions in the UK and northern Europe. But the truth is it’s a cross-level, cross-location steamer that’s good to go no matter what.

Best for? The women’s entry level suit for beginner and intermediate surfers.

There’s some seriously punchy tech on offer in the Roxy 3/2mm Syncro Womens Wetsuit. It’s all classic Roxy stuff – a 100% StretchFlight rubber that means good range of movement, blind-stitched seams to keep the whole thing trim and easy to pull on and off, and Supratex knee pads to protect key contact areas (lovely for foam boarders and those on stiff fiber).

But it’s the Vapor Stretch that puts this one up there with the finest of the fine summer wetsuits for women. That’s specifically designed to harness UV heat from the sun and channel it back into the suit. We’ve found it hard to tell how well it works because there’s also an in-built infra-red warming channel, but let’s put it this way: We have NEVER shivered on the way out of the water between May and September if the Syncro was in the bag!

What exactly is a summer wetsuit?

The truth is that summer wetsuits aren’t all that different to winter suits. Basically it’s all about the thickness of the neoprene or natural rubber that’s used in the suit construction.

Suits for cold-water surfing tend to have at least 5mm to them. Fall and spring suits compromise with 4mm. Summer suits all start at a thickness of 3mm. That might not seem like much but it makes a whole load of difference to the weight and the flex of the product, so you’ll be surfing better and for longer. Or at least that’s the idea.

What temperature do I use summer wetsuits in?

Generally speaking, summer suits should be used in waters with temperatures of 16-22 degrees. The hotter the water, the more you’re likely to be able to switch to a shorty (a type of summer suit that has no arms/legs). If it’s your first time buying a suit for the warmer months, we’d stay stick to a 3/2mm full suit – that’s the standard across the board and offers the most versatility overall.

The Ultimate Guide to Surfing in San Francisco

The Ultimate List of The Best Wetsuits for Kids For 2022