Crooked Wetsuits review – A true toaster of a suit 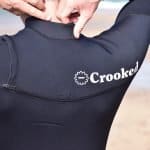 Crooked suits hail in from New England. That’s a land where you’re often chasing storm swell in 20-degree waters with only snow plumes and sharks for company. To put it another way: It’s a land that breeds hardy surfers that demand just-as-hardy wetsuits. That seems to be the aim of the game from this start-out brand. Keeping things simple and sweet, they’ve created a piece that’s flexy and affordable, but, above all, stands up when the thermometers are too icy to read.

They contacted us to ask if we’d like to give one of their all-new 4/3 winter suits a whirl. We did just that. So, with the usual caveats that we’d be as brutally honest as we are in all our gear rundowns, we took it out on a couple of Pembrokeshire and Gower spring sessions to put it through the paces. Here’s the verdict; the warm, un-flushed verdict.

This is just one part of our complete guide to wetsuits

Crooked wetsuits: The thermal side

We surfed this bad boy on the cusp of the UK winter-spring. That’s a time when we’d usually be looking to drop the 5/3 to a 4/3 anyhow, but there was a cold snap rolling up through the Celtic Sea, so we think we’ve given it a fair bash around (even if we aren’t getting close to the icicle-forming sub-zeros of New England where Crooked hails from).

We’ll just lay it right out there: We were a toasted Welsh rarebit from beginning to end. For the stateside readers: We were real warm. To be fair, that’s what we’d expect of a brand that’s laid out their stall with combating Maine and Great Lakes cold fronts right at the center. But it was balmy like an are-you-sure-this-is-a-four-mil-suit sorta’ balmy. What’s more, it was balmy without all the ins and outs of some new-fangled neoprene technology.

Crooked skips the jargon in favor of keeping it simple. You don’t have infra-red, solar-powered, Tesla-battery engine rooms hidden somewhere in the chest panel. It’s just high-quality rubber that does was you expect it to do and then some. The idea is that the best test isn’t in some fancy new trademark. It’s in the testing; in the using. The proverbial proof is in the proverbial pudding, if you like. And we were happy, warm, puddings for our two-hour session in sub-50-degree waters, mostly with 25 mph winds blowing in from the north.

If you HAVE to get geeky about it, then it’s all about the Yamamoto neoprene. By most estimations, this sought-after stuff has something like 30% more air bubbles than its petroleum-based compadre and a higher density of nitrogen-filled bubbles. We’d prefer to sum it up like this: The thermal side of this suit ISN’T going to be an issue. Crooked say they will deliver on this front and they do.

We gather that part of the philosophy here is to get the thermo tech kicking so good that you can afford to take the thickness down a notch even in the colder months. Like we said, this wasn’t a test in the peak of the Welsh winter, and certainly not an Atlantic romp on a heavy nor’easterner, so we’ll stop short of saying that the theory works all the time.

What we can say is that it worked for us in that annoying phase between seasons. We surfed Crooked 4/3 at a time when we were swapping 5s and 4s like Pokemon cards. This one didn’t leave us worrying we’d made the wrong choice.

The reason all that’s so important is that you’re looking at surfing a thinner wetsuit in the peak of the low-temperature season. Any cold-water regular will tell you that’s a true gift when it comes to flex because it takes off weight and stiffness from tip to toe.

As to the general tech of the piece, we’d again make the nod towards the tried-and-tested Yamamoto brand that powers Crooked suits. By now it’s well known that the stuff trumps virtually all the mainstream petroleum-based neoprene that’s still – we don’t know why? – being used by leading brands. The mantra repeats: More air bubbles equals a lighter feel. Couple that with the power to drop a full millimeter and you’re looking at a pretty darn flexy experience.

With inflation at 10%+ and gas prices through the roof, we can barely afford to keep our van purring over. There’s no chance we’re going to be flashing the plastic on a new winter suit season after season at $500+ a pop.

Crooked suits aren’t anywhere near that, though. Retailing at $300 for the summer 3/2 and $400 for the full-shebang 4/3 hooded, these guys have nailed it on the value front. They’ve made it suddenly affordable to contemplate re-upping your kit each year, and, by extension, suddenly more affordable to be a cold-water surfer. Period.

That’s not to be underestimated. Because everyone knows new kit outperforms old kit, this has a knock-on effect on the flex and thermal credentials you’ll enjoy day in, day out. If you can squeeze a shiny new Crooked every 12 months then that’s bound to keep you balmier and more maneuverable in the water, mainly because you’re locking down Yamamoto that’s fresh off the factory line with seams that have just been taped and glued. It’s sure to shit all over your vintage 5/3 Rip Curl, even if Gabriel Medina wouldn’t agree.

Although Crooked stress that it’s all about going back to basics and getting the simple things right, we couldn’t help but remark on a few of the little hidden features of this 4/3. First, the neck and wrist cuffs are spot on. They’re made from a double or single band of thicker rubber that keeps an elastic-tight shutter on those key openings. It’s easy to see why they’re there…Flushing is bad enough in a South Wales and Cornwall midwinter surf, so just imagine what it’s like in New England!

Anyway, when we’ve surfed branded 5/3s that promise to eliminate flushing, they generally tend to come to a gunfight with a toothpick. Or they do the job but take half a layer of skin with them for the trouble. No such thing on the Crooked. Over three sessions of testing, this one did a better job of ending water flow than most, plus my epidermis was still worthy of a Maybelline ad if I do say so myself.

Finally, there’s something positive to be said about the vibe of the whole business at Crooked. In a world of surfing that’s too often invaded by big business on the hunt for big bucks, these guys are clearly well rooted in their community. More than that, they embrace the kook side of life and back that up by fielding suits that are affordable for all surfers, both seasoned ripper and total newcomer.

Notice that this section is short. Quite right. We genuinely think Crooked have done a fantastic job of fulfilling the brief they set for themselves: Design a very warm suit that can hold up in the gnarliest North American conditions that won’t have you selling off your kidneys to buy.

If we had to be picky then we’d say that we found it a little tight out of the box. Granted, that’s normal. Most suits take a session or two to stretch out and find the right. buttery fit, but this was probably one of the harder ones we’ve had to work in.

Also don’t forget that warmth retention is focus numero uno. It takes precedent over flex here because, well, because that’s what you want come fall at the top end of the Eastern Seaboard. Surfers in warmer climbs might feel things a touch heavy and hot on longer sessions in Crooked neoprene. Still, we feel that’s more than mitigated by the fact that even midwinter Crooked suits are 4/3 and not the full five mil.

Cold-water surfers who don’t like remortgaging their homes to get top-quality rubber are probably the prime target for Crooked. But we actually think these suits have a MUCH broader appeal than that.

It’s not rocket science. The kit does exactly what wetsuits are supposed to do: It keeps you warm in the water. It does that but also utilizes the extra flex that’s afforded by Yamamoto neoprene to give a decent all-rounder that you can still rely on when it’s really (like, really!) cold.

We also love that the company is a part of a growing breed of grassroots surf brands that are truly community focused. It’s got fun branding and is unfussy from start to finish. You know what you’re getting. You get it for a good price. And it works.

You can bag a Crooked suit via the online store right now. Currently shipping throughout the US.

Please sell in Canada .I need one.Like come on.Its bad enough since the Pandemic even getting a Suit on Vancouver Island.