We’ve got the lowdown on all the best Algarve surf camps for 2023. It’s a curated list of packages that we think are really well suited to beginner surfers and up, all based in the sunny south of the nation. Take a look…

It’s no secret that most people look to the surfing meccas of Peniche or Ericeira for their camp packages in Portugal these days. However, the sun-kissed south of the country should not be overlooked. We think it’s actually among the best regions for total beginner surfers, since the waves on the south-facing beaches tend to be mellower and smaller. Plus it’s a great choice for winter surfing in the beginner and intermediate range – you get the pick of western breaks like Arrifana but also the protected bays of Luz and Lagos when the swell really gets pumping.

On top of all that, the Algarve is one downright stunning place. It’s perhaps the most chill part of PT, with olive groves, more than 300 days of Vitamin D per year, and whitewashed fishing towns all in the mix. That sets the scene for a place that has some seriously fantastic surf-stay options, which is precisely what we focus on throughout this list of the best Algarve surf camps for 2023… 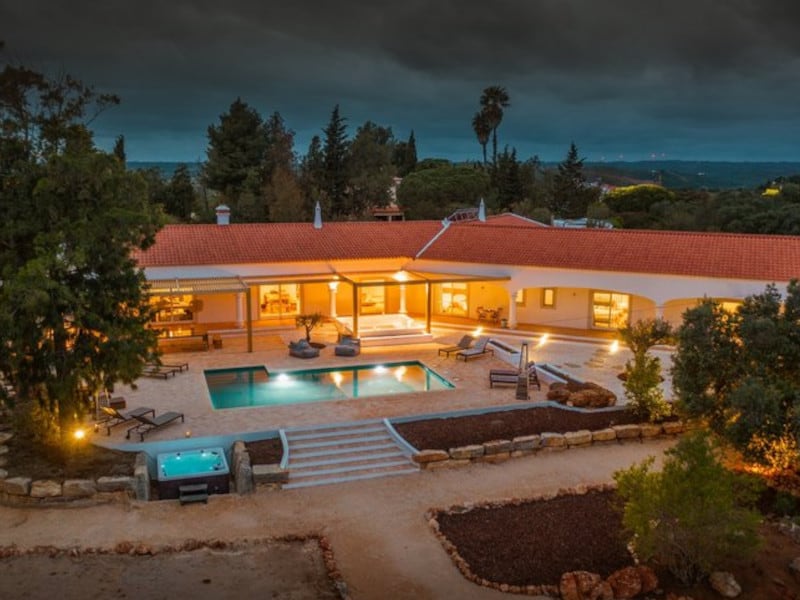 We list the Tiny Whale Surf Lodge among the hottest surf camps in the whole of Portugal for 2023. And with good reason. It’s just an all-round star, especially if you’ve only surfed a few times and are looking for that course to take you from whitewash to green wave. They have an 8-day package that’s tailor-made for progression out of the whitewash. And it works…

More than that, the Tiny Whale Lodge is really, really nice. It’s a boutique villa with boho vibes plonked in the midst of the sunny south Algarve. There’s a big lounge for chilling, an infinity pool for kicking back, and a whole range of events to help you mingle with other surfers, from BBQ nights to cooking evenings. There’s a reason that this one gets so many great reviews!

(Oh, and for intermediates, they also do a specialized spring and fall package for green-wave surfers. It’s only available at key months of the year when they can all but guarantee the right conditions for proper progression but it’s awesome!)

A note on why we partner with BookSurfCamps.com: Book Surf Camps are probably the biggest online aggregator of surf camps and surf-yoga packages in the world. We sounded out a quite a few potential partners before we affiliated with them. But, in the end, the abundance of choice for beginners, intermediates, and female-only surfing sealed it. We also love the simplicity of their booking system and the trusted brand name, along with the focus on connecting with homegrown local businesses on the ground. 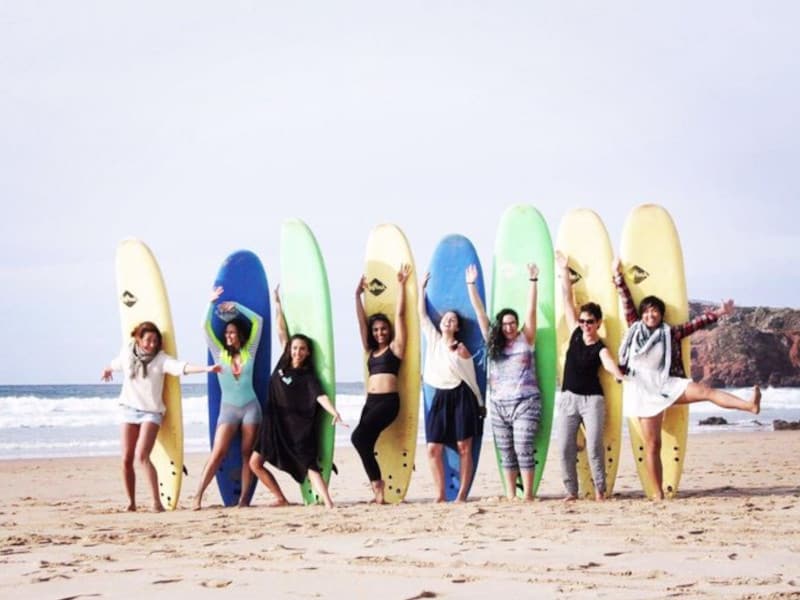 The packages on offer from Yoga, Surf & Nourish aren’t so much about surf, surf, and more surf. They’re a bit more holistic in their approach and offer a fully-fledged focus on wellbeing, eating, and yoga, which is actually the main area of expertise of course convener Shaini.

Over the course of just a week, you can expect a whopping 10 individual yoga sessions with arguably one of the most seasoned instructors in the whole region. They begin with more vigorous wake-up classes in the early hours followed by calm-down, restorative yoga and mediation in the early afternoon. There are optional daily surf and lunch outings everyday for those who want to connect closer to the ocean. Alternatively, you can just chill by the pool, visit a local town, or go hiking in the coastal reserves of the Western Algarve.

Capping the lot off is a stay in the five-star Costa Vicentina Luxury Retreat House. It’s a serene place to be based, with good links to beginner-friendly beaches like Arrifana and interiors designed in line with barefoot luxury principles (AKA – no shoes required). All meals are provided and the whole lot is 100% vegan-veggie with a health-conscious theme. 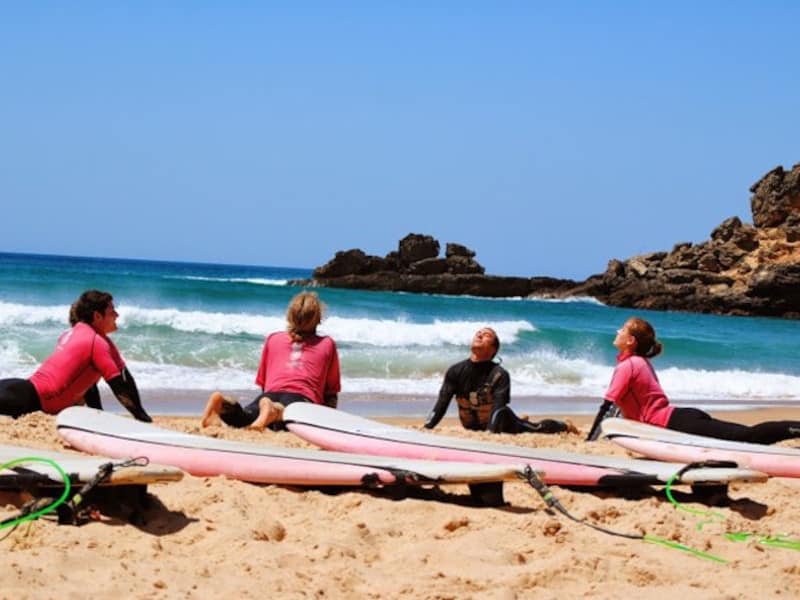 There’s no doubt about it: The Jho’la Surf Camp is up there with the best surf camps in Portugal, let alone the best Algarve surf camps. Sadly, it probably doesn’t get the plaudits it should because it’s way down on the south-facing beaches of Luz. That’s a great spot for big winter surfs for beginner-level attendees, but also fine for accessing the more swell-sucking spots of Sagres and Bordeira if need be.

The camp has made a name for itself by offering well-balanced surf-yoga packages for small groups with top-quality tuition. You can expect 4-5 hours of technical and theory training before you even get in the water, backed up by five separate surf outings to either the south or west side of the Algarve (the course runners know where’s good and when).

More than that, Jho’la really is by surfers, for surfers. You can tell that because they even have an on-site shaping bay where you can go to learn all the ins and outs of surfboard crafting, and even get yourself a custom should the wallet allow! 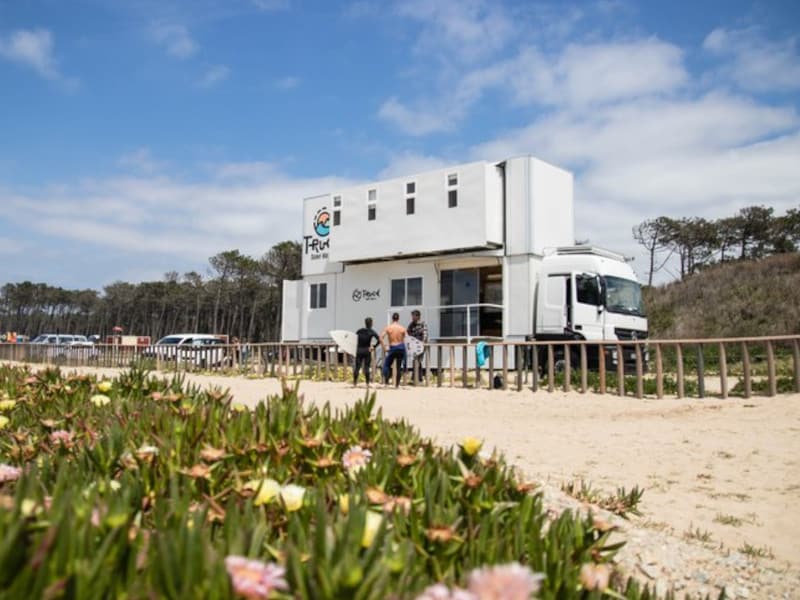 This is a surf camp with real pizzazz. Mhmm…a seven-day package in the legendary Truck Surf Hotel means you’ll basically get to explore not one, not two, not even three, but a whole hodgepodge of different breaks up and down the western and southern shores of the Algarve. That’s because the hotel itself is on wheels!

Housing up to eight guests at any one time, this moving surf camp is actually a converted Merc that has its own social areas, double bedrooms, a dedicated shower, and even cinema area (for both chillout flicks and criticizing your surf moves after a session).

Their Surfari package will whisk you up one of the most wave-rich quarters of the Algrave, starting in Lagos and heading right up through Sagres and Aljezur through the must-surf breaks of the region. The beauty of it all is that you’re mobile, so if a break’s not working then it’s just a case of moving on. All gear is included in the price and is contained in the truck with ya’ll.

An amazing concept that gives an amazing experience. One for the bucket list perhaps?

If you’re not into booking complete packages that have all your lessons and whatnot pre-organized, then a simple accommodation-only stint at the Sagres Sun Stay – Surf Camp & Hostel is sure to bring plenty of great surfing. We choose this as our standout go-it-alone Algarve surf camps or a few reasons…

First, it’s in Sagres. That’s perfect for accessing both the south-facing shores around Luz and Lagos, which can be epic on HUGE winter-swell days. But it’s also great for hitting the beaches that run north towards Arrifana, which are better when it’s small and almost always have something worth surfing.

Second, the pad itself is well-rated and it ticks all the boxes for a budget-surf stay in one of the most consistent surf towns in the country. There’s a pool in a shared deck area that’s perfecto for chilling as a group. You can pick between dorm and double options. There’s even a dedicated surf locker room like it’s some sort of summer ski hotel. We love it.