We’ve listed all the best surf camps in Spain for 2023. We’ll focus on the packages that really push quality tuition and technical surf training, but also the ones that check the boxes for comfy accommodation and good vibes. Take a look…

To tell you the truth: Surf camps in Spain aren’t all that popular. The country is sandwiched between Portugal and France, after all. What’s more, the locals kinda’ like it this way. Secret beach breaks and point breaks span the whole of the northern coast, from the Basque Country to Galicia, while occasional Mediterranean waves roll from Barcelona to Cadiz in the south. There’s loads to surf, with something for all levels, but the culture of planned surf lodges for fly-in travelers hasn’t really taken hold and some say it’s better for it.

That’s not to say they don’t exist. They very much do. In fact, it’s precisely because of the rarity that Spain is a fine place for going off the beaten track, for tasting local tapas, and enjoying unique vibes, meeting the locals and surfing setups that aren’t packed to bursting from May to September. Tempted? Focus on the Spanish camps of regions like Asturias and Cantabria. They’re amazing experiences rich in culture, taking you to beaches you wouldn’t usually think of.

There’s one exception to the general rule: The Canary Islands. That string of sun-kissed rocks in the Atlantic is Spain’s big surf draw. They basically have waves every single day of the year, and offer some of the finest camps in the whole of Europe, let alone just in the home of flamenco and bull fighting. We think they are excellent for total beginners and family groups. Anyhow, let’s take a closer peek at the best of the bunch for 2023… 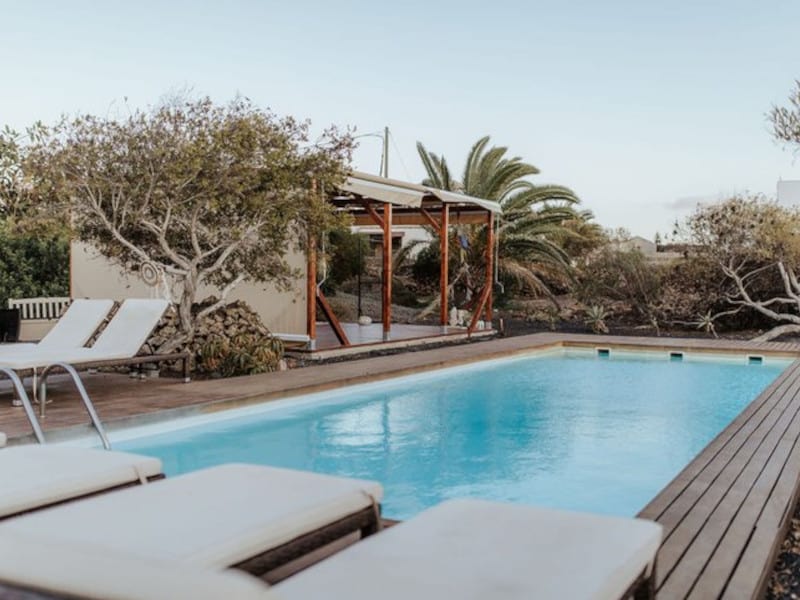 The single most comprehensive surf package in the whole of Spain for 2023 comes courtesy of Surf & Yoga Fuerteventura. It’s a 14-day romp to the sunny isle of the eastern Canaries, packed to the brim with activities and surf practice. Participants get nine separate guided surf lessons with Priyal Kiramage, an ISA Level 1 teacher with pedigree surfing in Sri Lanka and Europe. That’s backed up by unlimited access to the in-house surf gear, so you can hit the beaches and hone what you’ve learned whenever you like.

As the name implies, the camp strikes a balance between surfing and yoga. As such, there’s a duo of yoga classes every single day. They’re run by camp leader Gracy and run the gamut from morning energy flow yoga sessions to calming Yin yoga in the afternoon.

The Surf & Yoga Fuerteventura is something real special. It’s a sort of half Canarian finca, half Balinese getaway, with polished-concrete floor and semi al fresco lounge spaces. There’s nothing better than chilling out there once you’ve bagged four hours surf in the morning, whether you want to swim lengths in the 12-meter pool or kick it in a hammock with your book. Breakfasts and dinners are included, and all made from a super-nutritious vegan menu.

We’ve only got good things to say about Red Star Surf. These guys are based out of lovely Caleta town on the northwest coast of Lanzarote. That puts a long sweep of about 5km of pure, steady beach break right on the doorstep – we can hardly think of anywhere better for total beginners to come and get on the water for the first time.

The camp is well setup for that too. Their week-long package (eight days and seven nights) includes five separate surf lessons that are backed up by video analysis later on in the day and etiquette and theory introductions before you paddle out. The whole lot are run by ISA-qualified instructors with plenty of experience. More advanced surfers won’t be left out either, since there’s a Surfari option that takes you to some of the more distant Lanzarote breaks away from the beaches.

The camp has only handful of rooms and likes to keep things intimate, hosting up to about 20 people at any one time. That means there’s a good sense of camaraderie, and the place is well-suited to bigger groups or families. 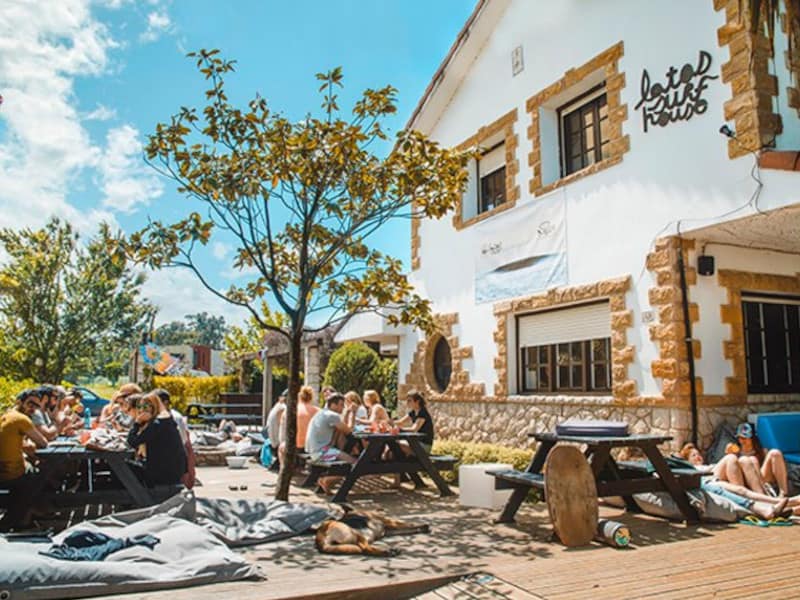 Remember we mentioned that the surf camps in northern Spain are all about going off the beaten path and getting an authentic taste of local culture? Cue Latas Surf House. In our humble opinion, this is the leading surf lodge in the region of Cantabria. Head to that part of the country to find a gorgeous run of craggy shoreline on the Bay of Biscay that basically has waves all year round, though winter tends to be better for advanced surfers and summer better for the beginners.

The flagship package from these guys is the 8-Day All Levels Wave Surf Camp. That includes six days of surfing tuition with fully qualified ISA instructors, all your equipment, and warm-up training out of the water to start the day with.

Latas Surf House itself sits just a stone’s throw from Somo Beach. It’s a traditional north Spanish villa with both double and twin rooms, along with charming chillout spaces with ping pong and whatnot. The main draw for us is that you’ll be within walking distance of a lovely Cantabrian coast village, where you can stroll for coffees and tapas with the locals whenever you like. 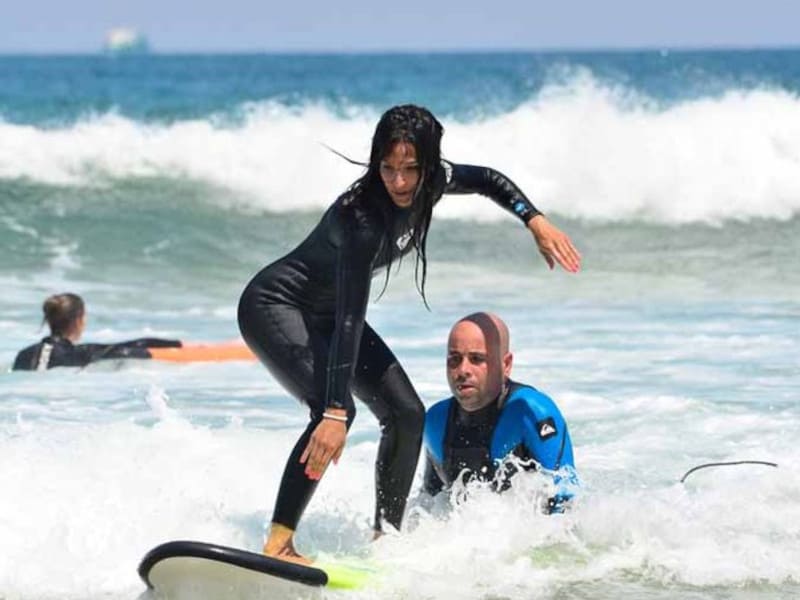 Surf House Somo has a long and impressive pedigree. They’ve been around for some time and can even lay claim to being among the first surf camps in Spain as a whole. The location? The gorgeous coast of Cantabria, within striking distance of multiple beach and point breaks, and walking distance of Playa Somo itself, where there’s almost ALWAYS a wave to practice on.

The 6-Day Intensive Course Package at Surf House Somo is one of the best around for advanced intermediates and up. It focuses on improving your surf level and touring hidden breaks in the Cantabria region, with an eagle-eye delve into specific technique changes and maneuvers on the wave. That’s delivered through daily surf lessons that last four hours apiece, under the tutelage of ex-pros like David Garcia and Nachete García and other ISA-qualified coaches in affiliation with the highly rated Escuela Cantabra De Surf Quicksilver Roxy.

If we had to pick a downside, it’s that surf gear rental outside of lesson times isn’t included (it’s only discounted) and that the package only includes breakfast, though the local town has loads of tempting Spanish cantinas to get stuck into!

As surf camps in Spain go, there’s hardly a more stylish option than the all-new Dreamsea in Fuerteventura. But then that’s exactly what we’d expect of a brand that cut its teeth making uber-cool surf lodges in Bali and then Sri Lanka before setting up shop on the sunny eastern isle of the Canary chain.

The product is a comfy pad to relax in between sessions on key breaks in Fuerte, from El Cotillo beach in the west to the Grandes Playa in the east. The guys here can organize as many or as few surf lessons as you like. The way to do it is a bit different to other camps – simply book your accommodation first and then add on surf rentals etc when you get on the ground.

We think this one really shines for traveling surf couples because it has some deluxe rooms and loads of peaceful on-site chillout spaces – especially that palm-shaded garden and coffee space. Ah, it’s a nice one!