The 7 best surf camps in Fuerteventura for 2023

We’ve listed all the best surf camps in Fuerteventura for 2023. We’ll focus on the packages that really push quality tuition and technical surf training, but also the ones that check the boxes for comfy accommodation and good vibes. Take a look… 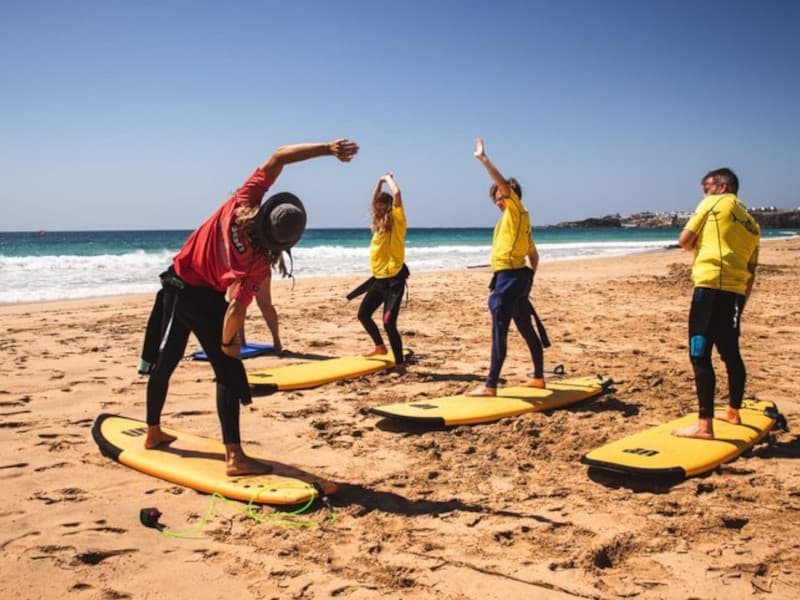 The sun-splashed isle of Fuerteventura has now sorta beaten the other canaries on the surf-camp front. It’s established itself as one of the go-to islands in the world for learn-to-surf trips and we think that’s a deserved epithet. There are breaks on the west coast and the east coast, a lot of which lend themselves to pop-up practice and relatively easy-going sessions. On top of that, you get a ridiculous consistency of swell that means you’ll have a great time no matter if you come here in December or June.

Thing is, that boom in surf travel for this beach-rich Canary has also lead to something of a boom in the number of surf camps in Fuerteventura. Today, there’s a quagmire of hundreds of options on the isle and not all of them are, speaking frankly, all that great.

Cue this guide. It will run through what we consider to be the crème-de-la-crème for surf camps in Fuerteventura for the coming year. We’ll focus on the packages that really push quality tuition and technical surf training, but also the ones that check the boxes for comfy accommodation and good vibes. You’ll be booking in no time at all! 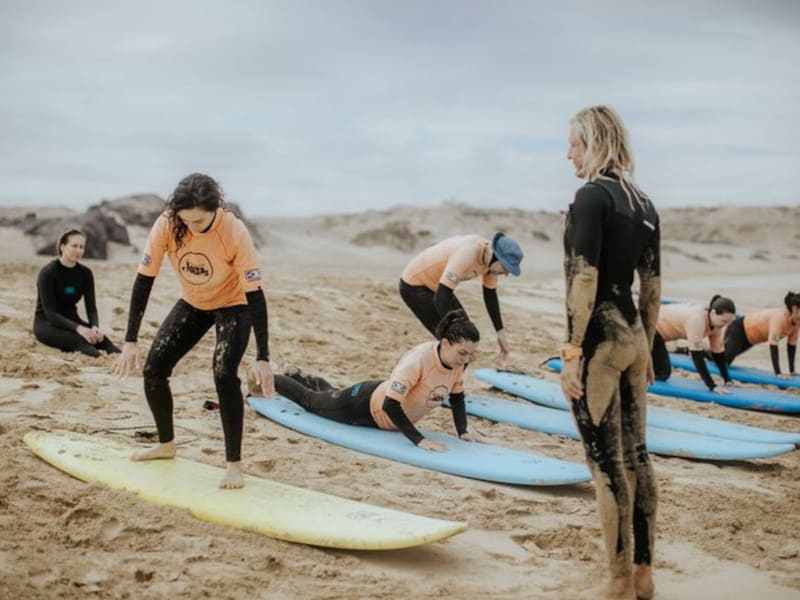 There’s no doubt in our minds that the folks over at Surf’n’Yoga have created one of the absolute best surf camps in the Canaries and Spain as a whole. It’s difficult to know where to begin with this one, but let’s give it a whirl…

First off, the focus is on holistic health and wellbeing. Not just your surfing. But ask anyone who knows what they’re talking about and they’ll tell you that healthy eating combined with regular yoga practice can only be a good thing for your wavecraft (heard of the OMBE method?). Second, the surf tuition is some of the best around. All instructors are fully qualified and sessions last a whopping four hours. They include transfers to and from surf spots plus all equipment (good equipment, too). We especially love that you can tailor your classes to match your level, with increments going from total beginner up to 2.2 advanced intermediate – that’s more increments than most schools.

We should also make special mention of the accommodation. It’s gorgeous. Built in classic Canarian style, it’s flooded with light and has half-indoor, half-outdoor spaces that tick all the boxes – from working to chilling. There’s also a lovely pool set between a cluster of palm trees right next to the dedicated yoga shala.

It’s not for nothing that this one’s our fav pick on the island for 2023!

STUNNING. There’s no other word that can sum up the Dreamsea Surf House. It’s undoubtedly one of the highest-quality surf camps in Europe, let alone just this corner of the Canaries, but then again it is a brand that has pedigree all around the world (we’d say Dreamsea can lay claim to arguably the best surf camp in Bali!).

Rooms are toned-down, understated luxury. They’re done out with bamboo chairs and polished concrete, whitewashed walls and leafy houseplants. The whole lot spills out into a sun-kissed outdoor space where it’s a downright pleasure to sit with a Kindle under the shade of a palm and while away the hours between surf sessions.

We’d book this one as a standalone hotel and then add-on the surf lessons and rental as you go. The reason? It’s SOOO simple to do and you can properly curate your week. There are daily lessons to join if you want to, but also extra packages like surf-skate outings, and yoga mornings. We could wax lyrical about the quality of this one for hours. Ahhhh. 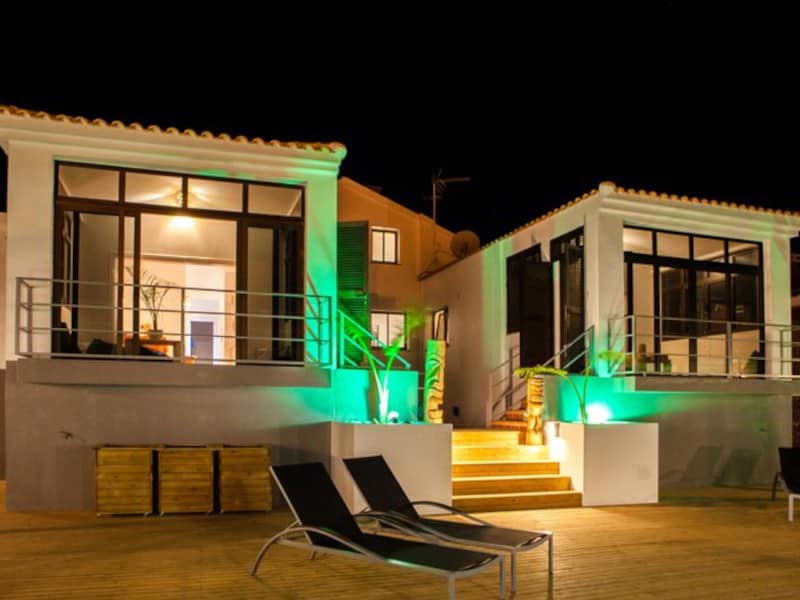 This female-only surf camp is a doozy for solo lady travelers who want to join likeminded folks on the waves of Fuereventura. It’s based out of the north of the island, which means the waves of both Corralejo and El Cotillo are on the menu. That adds great diversity, plus means you’ll be able to hit both easier and harder waves depending on your level.

The package is nicely padded out with loads of extras. They’re exactly the sort of thing you’d be on the hunt for if you’re looking to make new pals while learning to surf – think evening BBQs, hiking outings to lovely Lobos island, sunset volcano treks, and a whole load more.

On the downside, only breakfasts are included in the full package. 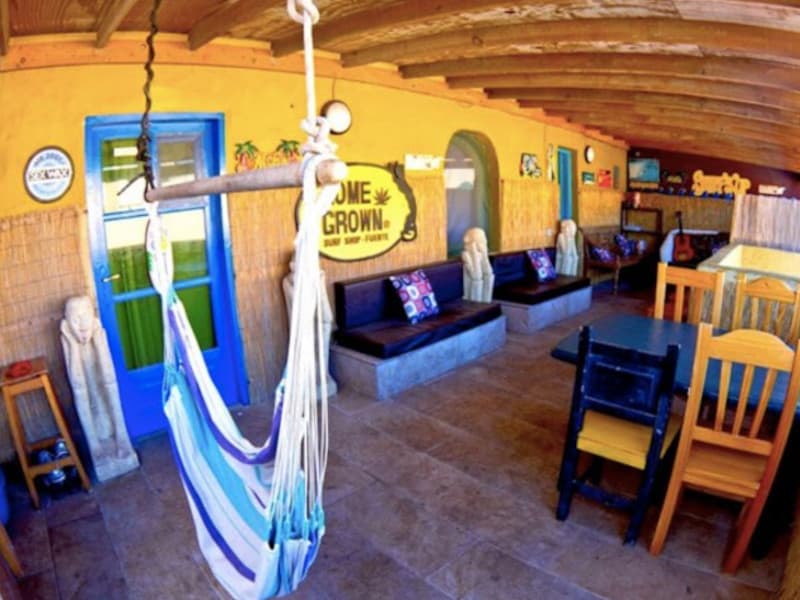 This one ticks pretty much all the boxes for solo surfers in the beginner to lower-intermediate category. It includes a full six days of surf lessons (some of the other packages in Fuerte only offer four or five days) with ISA-qualified or equivalent instructors (that’s key to keeping an eye on any bad habits that could creep in). The sessions are tailored to really home in on individual aspects of your surfing that will add up to make a proper difference to your abilities by the end of the week – think paddle technique, take-off theory, and speed generation.

All the surf practice is run by the tried-and-tested Homegrown Surfschool. It’s one of the OGs of Fuerteventura, with years of hospitality behind them. The upshot? The guides know the island like the back of their hand, so there’s rarely a day when you’ll be caught out by a rogue swell direction. To put it another way: Guests here usually ride the better waves on the island.

If we had to pick a downside to the Homegrown Surfschool at Casa Hilda it would be the accommodation. Look: It’s great if you’re a budget backpacker and love the hostel scene. Just bear in mind that the facilities are a touch dated and the crowd is typically 18-30s. It’s not really the one for surfing couples or older surfers. 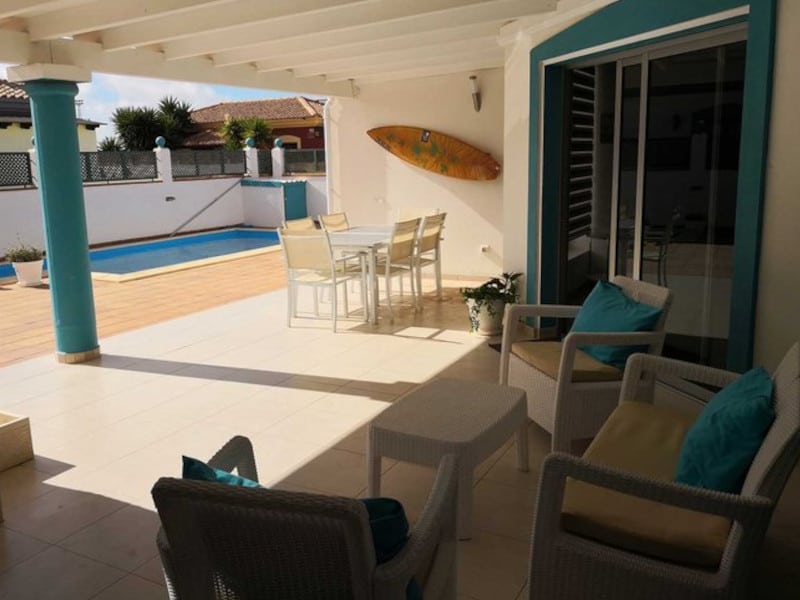 If you’re after a small-group surf experience that offers personalized lessons then you could do a lot worse than Surfintrip Camp. They operate out of a relatively bijou surf villa in northern Fuerteventura that can host just 10 people at any one time. Couple that with two dedicated surf instructors – both of them, perhaps a touch oddly, from the island of Sicily in Italia – and you start to see how it’s possible to really improve with the attention you get during this package.

We’re also impressed how long individual surf lessons last at Surfintrip. You’re looking at in excess of three hours in the water every day with focused tuition. That’s in comparison to around one to two hours in most mainstream branded camps.

The accommodation is chilled and comfy. It’s not a big hostel or dedicated surf hotel but rather a small Canarian villa with its own garden and pool. As such, it’s perfect if you’re looking for a surf camp package to do as a private group (you can just book the whole thing for 10 people and be done with it) or want a proper family vibe. 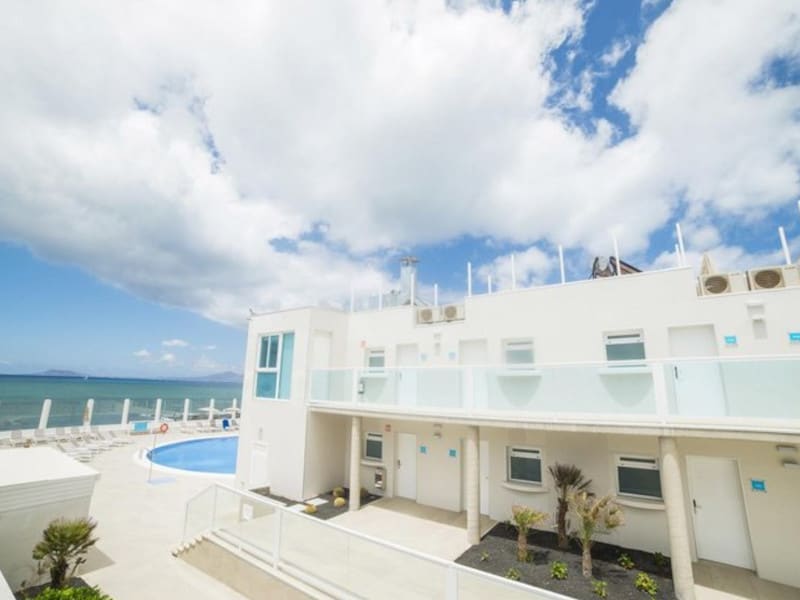 The TAO Caleta Mar boutique hotel is the setting for this eight-day surfing package. That puts you smack dab on the Grandes Playa stretch south of Corralejo, within walking distance of oodles of beginner-level and intermediate-level breaks, but also just steps from some of the very best beaches on the island.

The location, plus the modern style of the hotel – think contemporary rooms, fast Wi-Fi, and a big pool (actually, it’s two pools!) and garden space – lends the whole thing a very family-friendly vibe. That’s carried on through the tuition, too, which is semi-private thanks to group limits of six surfers and heavily weighted towards the novice end of the spectrum. It’s run by the well-rated Red Shark Surf School.

Last but most certainly not least is this classic among surf camps in Fuerteventura. Set right in the thick of the action in the town of Coralejo, International Surf Camp ONLY SURF has been drawing all levels of wave rider to its pad for some years now. It’s garnered a rep as one of the most chilled and fun-loving camps out there. Veterans say that the chill sessions between surf lessons are almost as good as the lessons themselves!

Optional daily outings can be booked on-site at reception after you arrive. There are different surf trips for different levels – the guides are well-versed in picking a beach that’s suited to your particular skill. Equipment is included for lessons but needs to be rented separately for free-surf sessions.

The good news is that the International Surf Camp ONLY SURF shouldn’t break the bank. It’s among the cheaper surf camps in Fuerte.