Each year we run skim off the crème-de-la-crème of surf camps in Europe to showcase the pads and lodges that we think are doing things just right. Book yours now…

So, you’re looking for surf camps in Europe for 2023? You’ve come to the right place. Every year, we painstakingly sift through all the various surf stays, lodges, and glamping packages on offer on the continent to showcase the ones that we think really stand out from the crowd. From the consistent beaches of the Algarve down south all the way to the cooler waters of Cornwall up north, there’s plenty to get through.

You might notice that there’s a big focus here on Portugal and the Canaries. That’s not surprising. Those are the two places that have really established themselves as the learn-to-surf hubs of Europe in the last 10 years or so. They’re packed with amazing surf camps and surf schools, and back that up with consistent waves that work all year round.

In this guide, we pick out seven of the best surf camps in Europe and highlight why we think they’re the proverbial dog’s gonads. We’ll list ones for different types of surf travelers, so expect to have good options no matter if you’re a complete beginner or a loved-up duo hunting a wave-filled honeymoon. Let’s go… 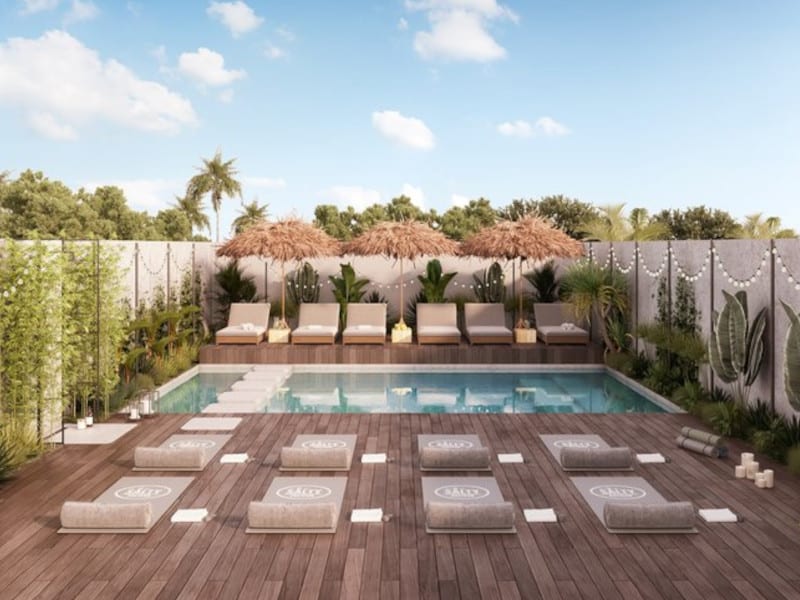 So, here it is: Numero uno, the bee’s knees. Yep, for 2023, we think the overall hottest surf camp in Europe is The Salty Pelican Yoga & Surf Retreat. It’s housed in an all-new build right on the side of the Peniche beaches in central Portugal. And there’s stacks and stacks of things going for it…

First off, their 8-day packages cover EVERYTHING you could possibly need. That’s five full days of guided surf lessons, unlimited access to the in-house surfboard rentals and gear, buffet breakfasts each morning, and accommodation in one of the slickest stays on the Peniche coast (more on that later).

But it also goes well beyond what other camps bring to the table. Guests can stretch out in the morning and align their Zen at the end of the day thanks to UNLIMITED hatha and yin yoga sessions. Plus there are regular nightly events to get the whole group gelling like they’ve been surf buddies for ages – BBQs, drinking games, pub crawls.

Perhaps most of all, though, it’s the brand-spanking new accommodation that you get here. The Salty Pelican have blazed a trail across Europe and Asia in recent years but this has to be one of their coolest pads yet. It’s a multi-story lodge with a rooftop garden come bar, set literally steps from the main Peniche beachfront. The whole thing is Boho styled and uber-cool. You won’t regret it! 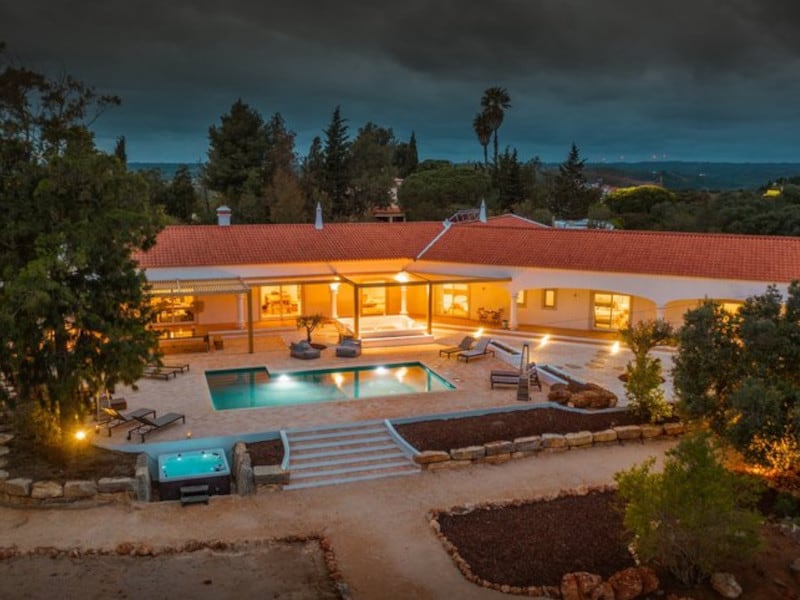 Following hot on the fins of the Salty Pelican is another of the legendary surf-camp experiences of PT: Tiny Whale Surf Lodge. This one’s really made a name for itself as a quality option in the southern region of the Algarve, which is why we regularly recommend it to total beginners – you can pick between heavier west coast waves and really mellow south coast waves down there, so there’s always something to learn on.

Tiny Whale also profess a philosophy that’s honed to help people progress from whitewash to green waves in just a matter of days. They’re all about a “personalized approach to surf coaching,” keeping group sizes very small and employing only ISA Level Two instructors who really know what they’re doing. That’s all framed by technical surf lessons, surf theory, technique practice in the pool, and daily video analysis. It’s basically impossible to leave this camp without being a better surfer than when you started.

And, of course, we love the camp itself. It’s a charming Algarvian-style home set between the rolling olive groves just a little inland from the south coast. You’ll have the feel of chilling with a group of pals thanks to the stylish communal spaces and outdoor gardens with private pool.

There’s something undeniably soothing and calming about checking into a Dreamsea stay. These guys have created some of the most serene and stylish surf camps in the world since setting the ball rolling with their cliffside pad in Uluwatu. And while the OG of the brand has become something of an Instagram bunny fav, this new outlet on the sun-splashed Canary of Fuerteventura is well worth a look in.

It channels the Spanish vibes of the Atlantic isles with whitewashed walls and palm-speckled gardens, offering plenty of chillout spots and cozy nooks and crannies for that R&R post surf. Room options run from dorm beds to romantic doubles, each with bright and breezy bathrooms with walk-in showers.

They have an on-site surf rack filled with everything from shorties to big beginner foamies, an in-house instructors ready to take you to both the west and east coasts of the isle (they’ll know which is working). Book it as accommodation only and then piece together a plan when you get on the ground in Fuerteventura. Easy.

No guide to the best surf camps in Europe could possibly skip out on a place in Ericeira, now a designated World Surfing Reserve. And so here it is: Laneez. A classic whitewashed Portuguese villa with red-tiled roofs and a place atop the soaring cliffs of the Silver Coast, it continually gets plaudits for the quality of its surf instruction and the overall vibe.

Let’s deal with the latter first. There’s just a lovely buzz about this place. Couples, groups, and individuals are mishmashed together in their very own surf home, which includes lively social areas and outdoor patios overlooking the Atlantic Ocean. There’s a fine lineup of weekly events to keep you busy, from BBQ to nights out in Ericeira downtown. If you come alone, you won’t feel like you did – let’s put it that way.

The in-house surf school is of the highest quality. It’s run by Miguel Ruivo and Mark Durbano, who have a combined six decades of surfing experience to their back and know the beaches of the Ericeira coast like the back of their hand. Group session tend to be small and highly focused, with both theory and etiquette briefings to get things started. 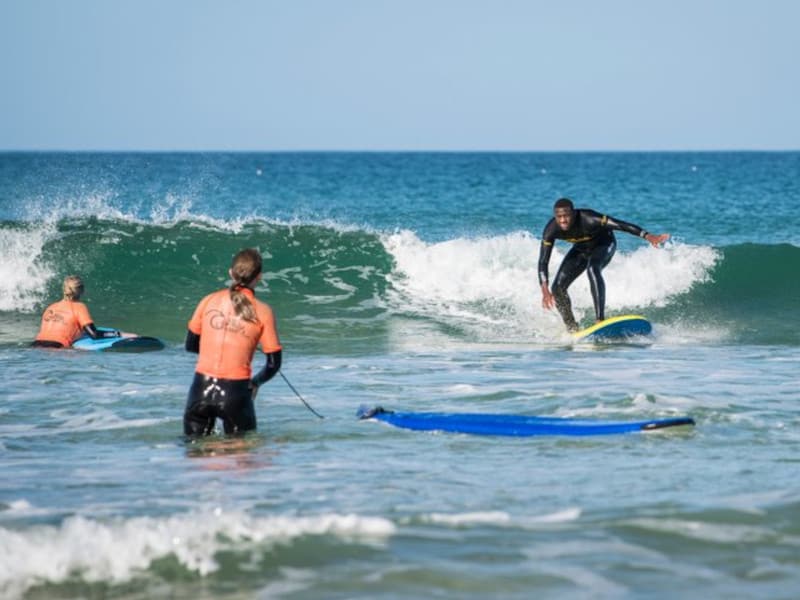 The guys down at Cornish Wave Surf and Adventure now offer awesome three-day surf and wild camp packages that are especially perfect for staycationing couples and families in the UK. They’ll give you a real experience in the salt-washed Southwest county, with a trio of guided surf lessons that take place on the reliable waves of Newquay, the self-proclaimed surf capital of England and the home of Boardmasters.

It’s really tailored towards beginners and groms. Day 2 starts with a practical session on the waves on Newquay’s main beach before a theory lesson in pop-up physics and proper technique back at the campsite (more on that below). Day 3 caps it all off with an elongated morning of surf practice on the waves, all under the guidance of qualified instructors.

This also happens to be the only surf camp on this list that’s based under canvas. Yep, your accommodation here will be in large two-person bell tents in a gorgeous woodland glamping patch in middle Cornwall. There’s loads to keep the little ones busy there, from scavenger hunts in the woods to survival courses. For the adults, it promises to be a romantic escape from the big city. 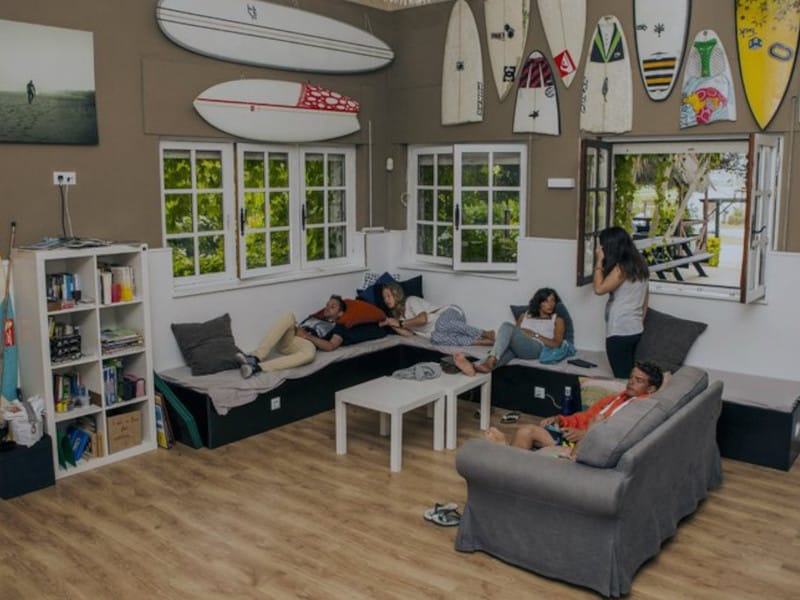 Skip the crowds of the Portuguese Algarve and the Hossegor beaches by swapping a southern PT surf holiday with a jaunt to Spanish Cantabria. Welcome to northern Spain, where the lush Picos de Europa roll down to meet the uber-consistent swells of the Bay of Biscay. It’s a prime location for the top-rated Latas Surf House, a chilled lodge where you can book onto this 8-day package to get six days of guided surfing on the local beaches.

This one caters to both solo travelers, couples, and families with their mix of dormitory beds, double, and single rooms. The experience includes breakfast every day and unlimited access to the on-site surf equipment (the beach is about 10 minutes’ walking from the stay itself, so you can head down and practice whenever you like). Teachers are all ISA Level 1 or 2 qualified.

Perhaps more than anything, it’s the location here that stands out. This is no big beach resort with surf camps and surf rentals everywhere. Instead, you’ll be based in the charming village of Loredo, a bijou clutch of cafes and tapas joints that’s slow-paced and authentic. 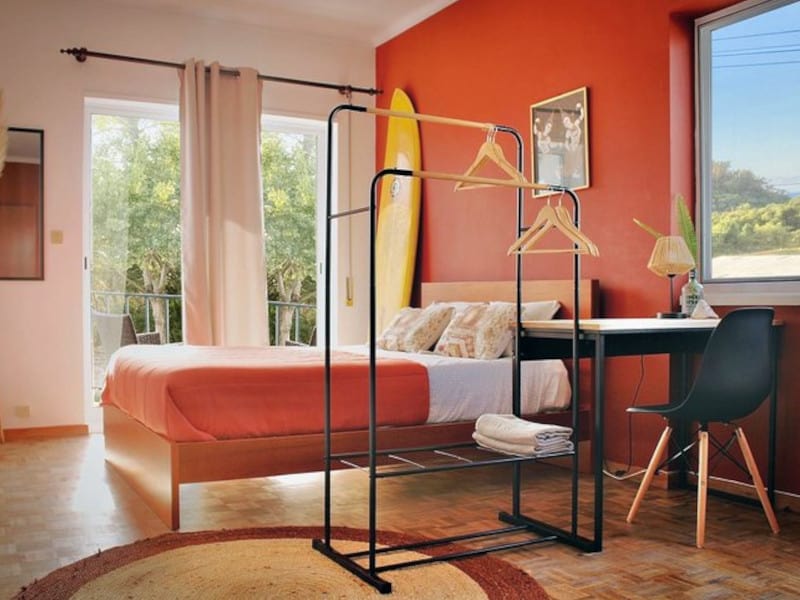 Last but most certainly not least on our round-up of the very best surf camps in Europe, Azores Bagus. This is – for us at least – the leading surf option in the Azores island chain. It’s one of the original surf camps in the archipelago and hits a lot of the right notes…

There’s a stylish lodge to return to after sessions, complete with lush gardens and communal hangout areas. The design throughout is hip and boho with a undercurrent of the local vernacular. Group sizes are inevitably small, since the place can only accommodate 10 people at one time. And all instructors are ISA qualified.

They’re great at running multi-level groups that put intermediates and beginners on the same spots. That’s something that the Azores really lends itself to – whitewash in front, green bombs out back – but it means that this is a great choice for couples or groups that want to surf together but have different skills coming into the camp.